Home > All Titanic passengers rescued without loss of life...
Click image to enlarge 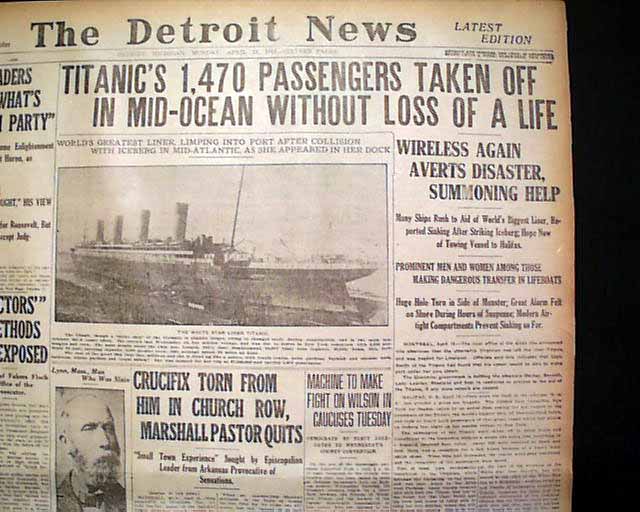 All Titanic passengers rescued without loss of life...

While most newspapers issue their first report on the sinking of the Titanic in their April 16 issue, some newspapers made the announcement in their later editions of the 15th. Here is one, and the headline is fascinatingly inaccurate: "TITANIC'S 1,470 PASSENGERS TAKEN OFF IN MID-OCEAN WITHOUT LOSS OF A LIFE". There are many related subheads including: "Wireless Again Averts disaster, Summoning Help" "Many Ships Rush to Aid of World's Biggest Liner, Reported Sinking After Striking Iceberg; Hope Now of Towing Vessel to Halifax" "Prominent Men and Women Among Those Making Dangerous Transfer In Lifeboats" "Huge Hole Torn in Side of Monster; Great Alarm Felt on Shore During Hours of Suspense; Modern Airtight Compartments Prevent Sinking so Far".
The front page also features a photo headed: "World's Greatest Liner Limping Into Port After Collision With Iceberg In Mid-Atlantic, As She Appeared In Her Dock". There is also a photo showing: "Luxurious Dining Room On The Titanic, Giant Liner Reported Sinking In Mid-Ocean". Inside has another photo of the restaurant reception room of the Titanic (see).
The text is equally fascinating, including: "...Officials said this indicated that Capt. Smith of the Titanic had found that his vessel would be able to make port under her own steam...The passengers of the Titanic were taken off in small boats and transferred to the Carpathia without a single life being lost, according to a dispatch received here today..." with much more.
Complete in 16 pages, minor margin chipping, otherwise in nice condition. A terrific issue for display with this erroneous headline.