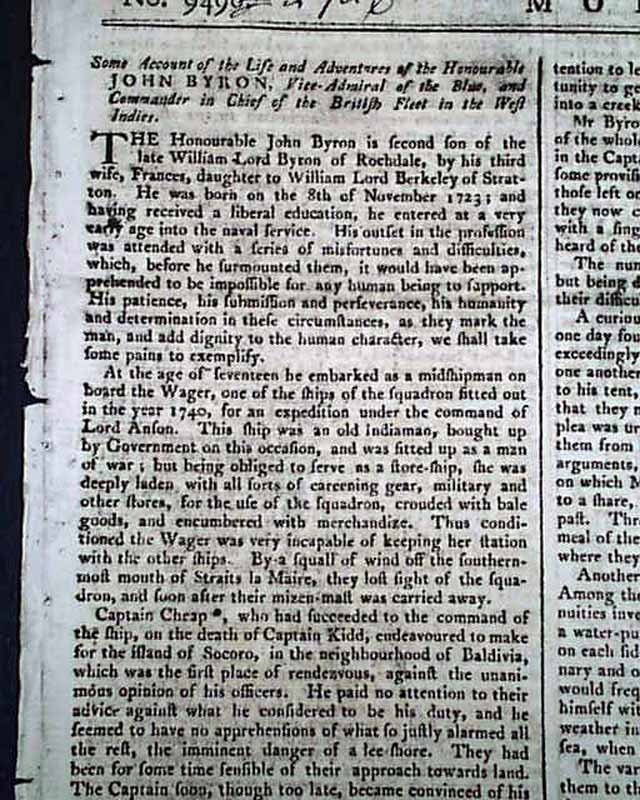 Almost the entire front page is taken up with: "Some Account of the Life & Adventures of the Honourable JOHN BYRON, Vic-Admiral of the Blue, & Commander in Chief of the British Fleet in the West Indies." continued in a future issue. Inside has a letter from New York which includes: "...that four men of war, with heavy artillery, sent for to Savannah by Gen. Prevost were arrived...but the main body of the army were at Stone; that their situation was such as to cut off all communication between Charles-Town and the ocean..." and: "...that Gen. Prevost had been obliged to retreat from before Charlestown but had got safe back to Fort Beaufort...".
One bit notes: "...the Richard, Roche, from St. Sebastian's to Dublin, was captured by an American privateer commanded by Paul Jones & brought into Port L'Orient, though the Richard was furnished with a French pass..." with more. A bit rare to find mention of John Paul Jones before his famous naval battle with the Serapis.
Four pages, folio size, some notations in ads & their margins, nice condition.