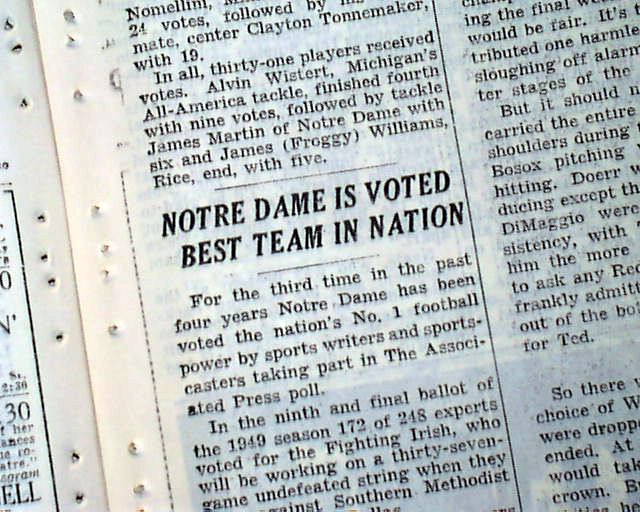 The sport's section (page 37) has a banner headline: "Hart of Notre Dame Selected by Wide Margin for Heisman Football Trophy" with subheads and related photo (see photos). Also a one column heading on the same page: "Notre Dame Is Voted Best Team In Nation" 1st report coverage on the Notre Dame Fighting Irish officially being named national champions of college football by the AP poll with standings (see photos).

Other news, sports and advertisements of the day throughout. Complete in 56 pages, rag edition in very nice condition.

wikipedia notes: The 1949 college football season finished with four teams that were unbeaten and untied-- Notre Dame, Oklahoma, #3 California and Army had won all their games at season’s end. Notre Dame, however, was the overwhelming choice for national champion, with 172 of 208 first place votes. The Fighting Irish did not participate in the New Year’s Day bowl games, which were played on January 2, 1950.