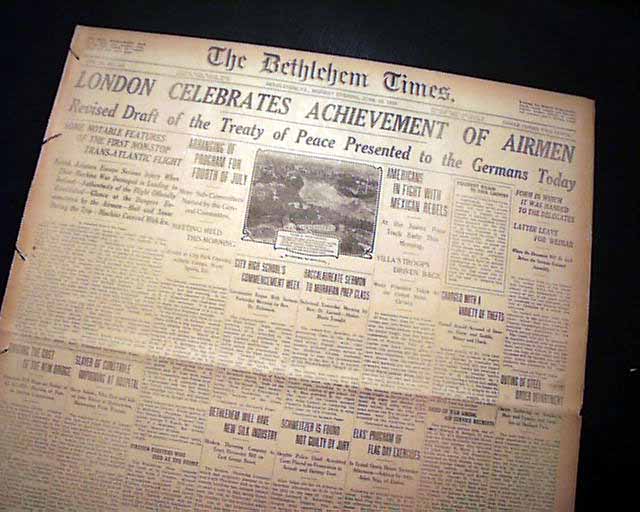 The front page has a banner headline: "LONDON CELEBRATES ACHIEVEMENT OF AIRMEN" with subheads that include: "Some Notable Features Of The First Non-Stop Trans-Atlantic Flight" and more (see photos).

This issue contains other news of the day throughout including sports and various advertisements. It is complete in 16 pages, has light browning and a little margin wear. It should be handled with care.

The flight nearly ended in disaster several times owing to engine trouble, fog, snow and ice. It was only saved by Brown's continual climbing out on the wings to remove ice from the engine air intakes and by Alcock's excellent piloting despite extremely poor visibility at times and even snow filling the open cockpit. The aircraft was badly damaged upon arrival due to the attempt to land in what appeared from the air to be a suitable green field but which turned out to be the bog on Derrygimlagh Moor, but neither of the airmen was hurt.

Alcock and Brown were treated as heroes on the completion of their flight. In addition to the Daily Mail award of £10,000, the crew received 2,000 guineas from the Ardath Tobacco Company and £1,000 from Lawrence R. Phillips for being the first British subjects to fly the Atlantic Ocean. Both men were knighted a few days later by King George V.