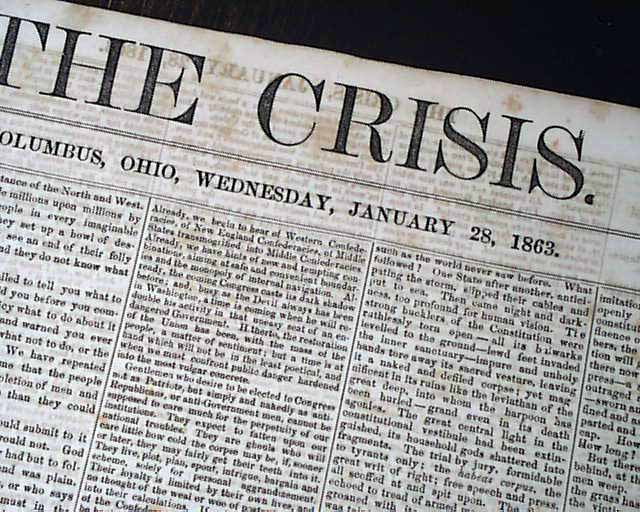 
THE CRISIS, Columbus, Ohio, Jan. 28, 1863  Among the articles in this issue are: "Burnside's Farewell to his Command" "Horace Greeley in Despair--He Dreads a Union Between the North & South--He Lets the Cat out of the Bag!" "Progress of the War!" "Prophetic!" "Kentucky" "From the Army of the Potomac" and much more.
This interesting title was described as "The Hottest Rebel Sheet to be found in the North or the South". It opposed the war and attracted the hatred of the Republicans and the Lincoln administration. It insisted that slavery could not be prohibited by law. So obnoxious was this paper to Unionists that it was denied circulation in some cities. In 1863 the press was raided by a hateful mob.
Eight pages, small piece from the right edge of the front leaf only does not affect any mentioned reports, a bit irregular at the blank spine, generally nice.