Home > Back to Search Results > War reports from America...
Click image to enlarge 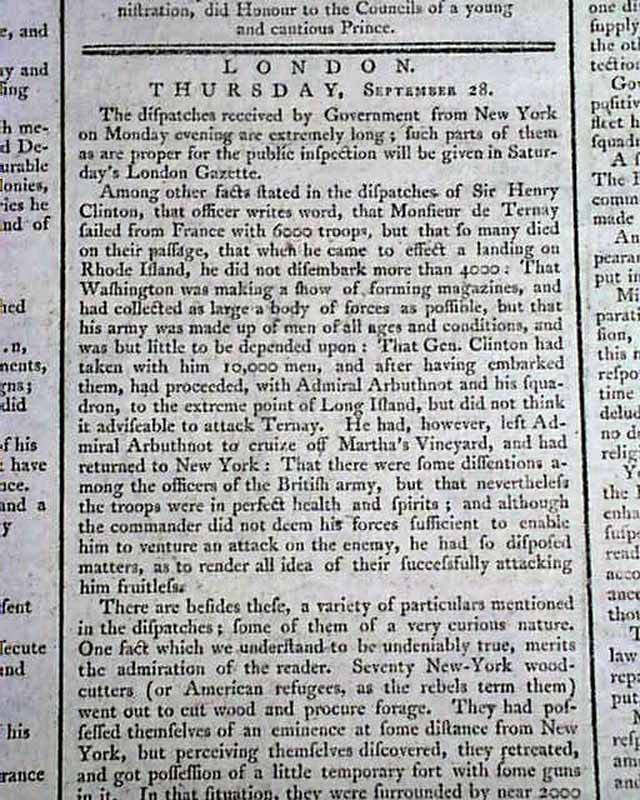 
THE EDINBURGH EVENING COURANT, Scotland, Oct. 2, 1780  Page 2 has most of a column taken up with various reports concerning the Revolutionary War, a few items including: "...that Monsieur de Ternay sailed from France with 6000 troops but that so many died on their passage that when he came to effect a landing on Rhode Island he did not disembark more than 4000. That Washington was making a show of forming magazines & had collected as large a body of forces as possible, but that his army was made up of men of all ages & conditions & was but little to be depended upon. That Gen. Clinton had taken with him 10,000 men & after having embarked them and proceeded...to the extreme point of Long Island..." and other items (see).
Page 3 has additional reports on the war, including: "...the army at New York are far from being dispirited at the arrival of the French troops and the increase of Washington's army. They wish only to meet the enemy on fair ground...The public expectation is not a little raised respecting the situation of affairs at New York..." and a bit further on: "...from New York and South Carolina...mention the different skirmishes which have happened with the rebels & the troops under the command of Lord Cornwallis, in which the loyalists were checked by the rebels...." with more (see).
Four pages, folio size, nice condition.