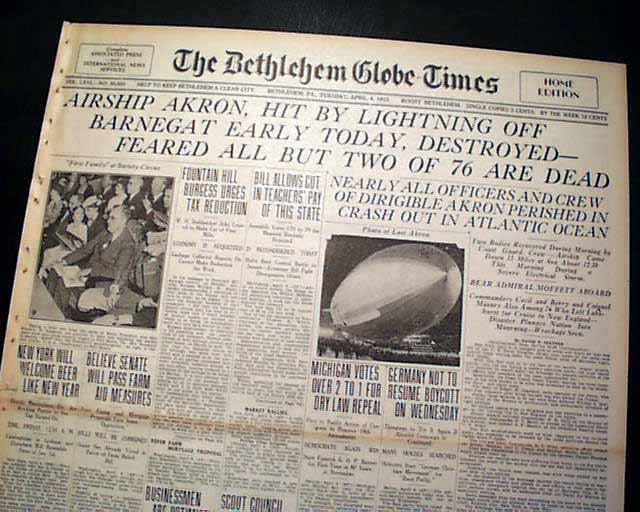 This 16 page newspaper has a nice banner headline on the front page: "AIRSHIP AKRON, HIT BY LIGHTNING OFF BARNEGAT EARLY TODAY, DESTROYED--FEARED ALL BUT TWO OF 76 ARE DEAD" with subheads and photo (see photos).

wikipedia notes: In April of 1933, Akron cast off from her moorings to operate along the coast of New England, assisting in the calibration of radio direction finder stations, with Rear Admiral Moffett embarked. Also on board were: Commander Harry B. Cecil, the admiral's aide; Commander Fred T. Berry, the commanding officer of Lakehurst's Naval Air Station; and Lieutenant Colonel Alfred F. Masury, USAR, a guest of the admiral, a vice-president of the Mack Truck Co., and a strong proponent of the potential civilian uses of rigid airships.

As she proceeded on her way, Akron encountered severe weather which did not improve as she passed over Barnegat Light, New Jersey at 2200 (10:00 PM) on 3 April. Wind gusts of terrific force struck the airship unmercifully around 0030 (12:30 AM) on 4 April, and pushed her down toward the sea. She crashed tail first and then sank in the stormy Atlantic. The German motorship Phoebus in the vicinity saw lights descending toward the ocean at about 0023 (12:23 AM) and altered course to starboard to investigate, thinking she was witnessing a plane crash. At 0055 (12:55 AM) on 4 April, Phoebus picked up Lieutenant Commander Herbert V. Wiley, Akron's executive officer, unconscious, while a ship's boat picked up three more men: Chief Radioman Robert W. Copeland, Boatswain's Mate Second Class Richard E. Deal, and Aviation Metalsmith Second Class Moody E. Ervin. Despite desperate artificial respiration, Copeland never regained consciousness and died on board Phoebus.

Although the German sailors spotted four or five other men in the stormy seas, they did not know that their ship had chanced upon the crash of Akron until Lieutenant Commander Wiley regained consciousness half an hour after being rescued. Phoebus combed the ocean with her boats for over five hours in a dogged but fruitless search for more survivors of aviation's biggest single tragedy to that date. A Navy blimp, J-3, sent out to join the search, also crashed, with the loss of two men.

The United States Coast Guard cutter Tucker (CG-23), the first American vessel on the scene, arrived at 0600 (6:00 AM) and took on board the Akron survivors and the body of Copeland, thus releasing the German motor vessel. Among the other ships which relentlessly combed the area for more survivors were the heavy cruiser Portland (CA-33), the destroyer Cole (DD-155), Coast Guard cutter Mojave, and the Coast Guard destroyers McDougal and Hunt, as well as two Coast Guard planes. Most, if not all of the casualties had been caused by drowning and hypothermia, as the crew had not been issued with life jackets and there had not been time to deploy the single life raft on the ship, the crash left 73 dead, and three survivors. 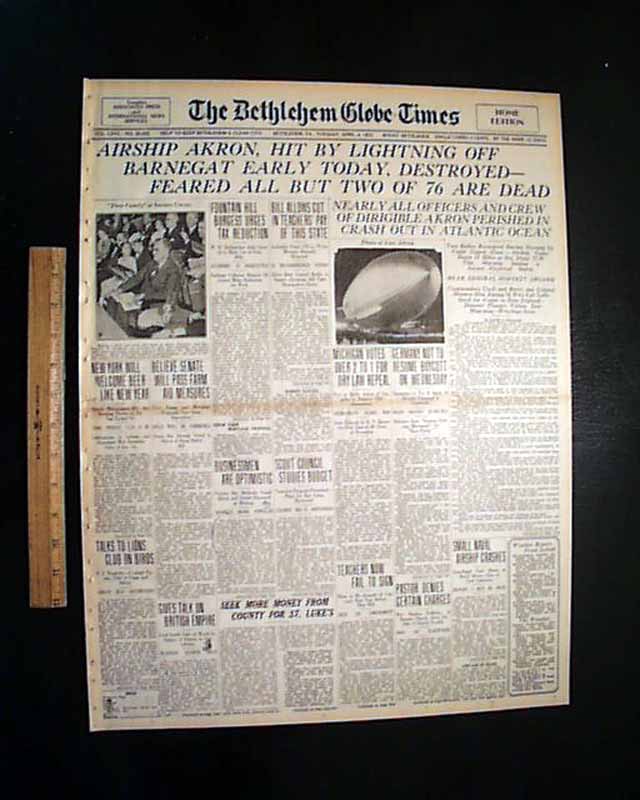 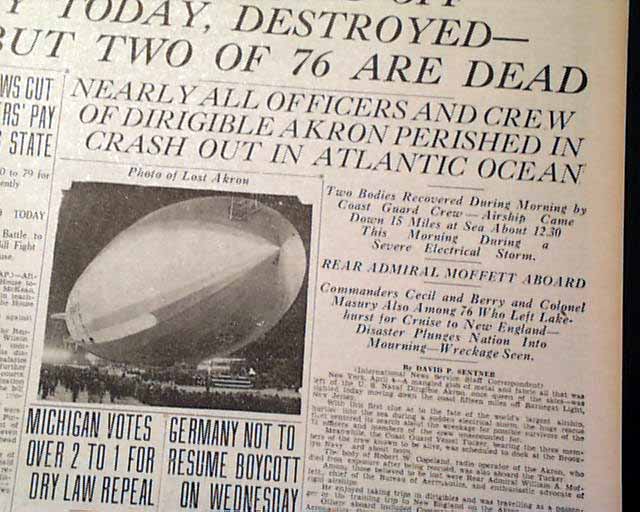 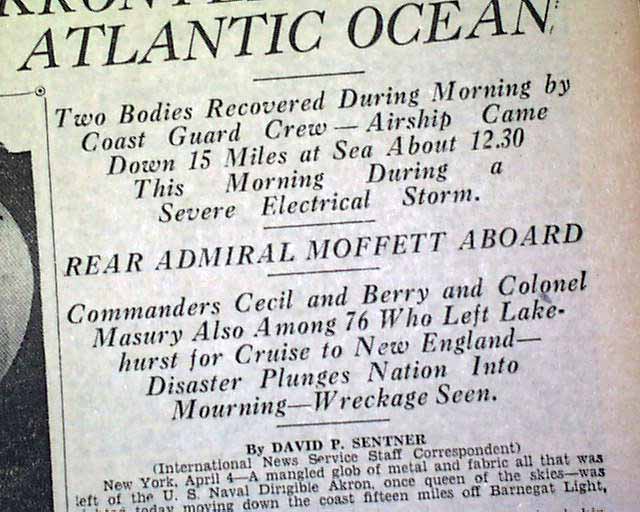 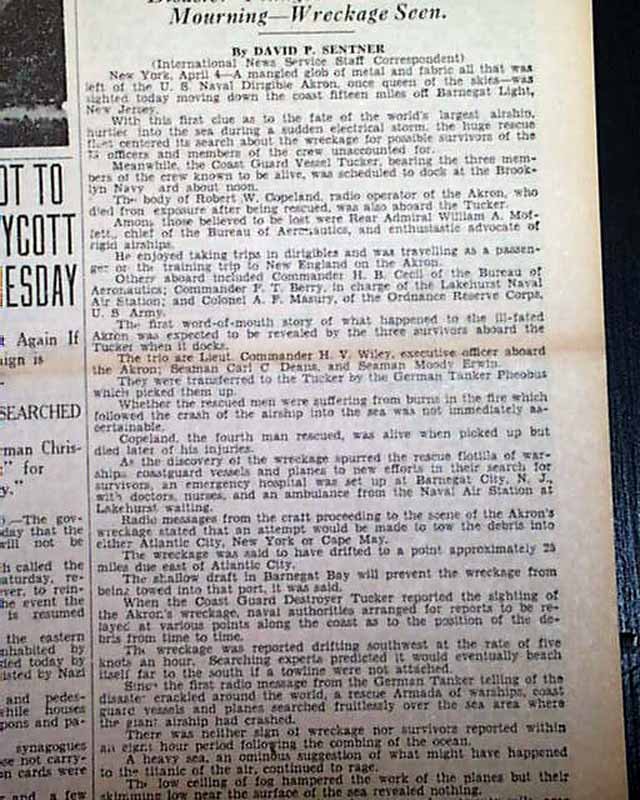 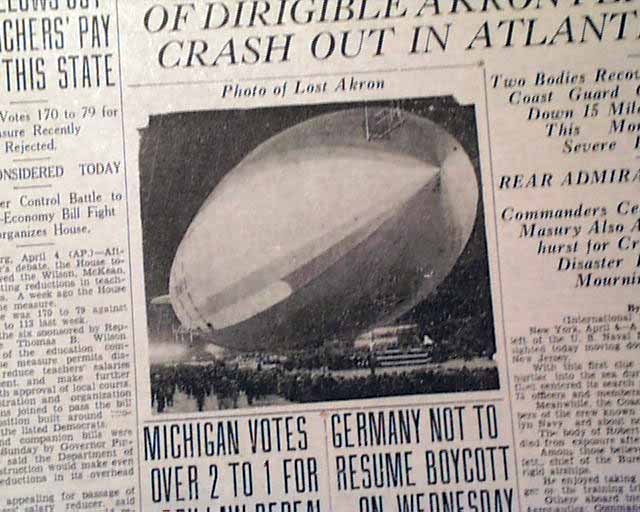