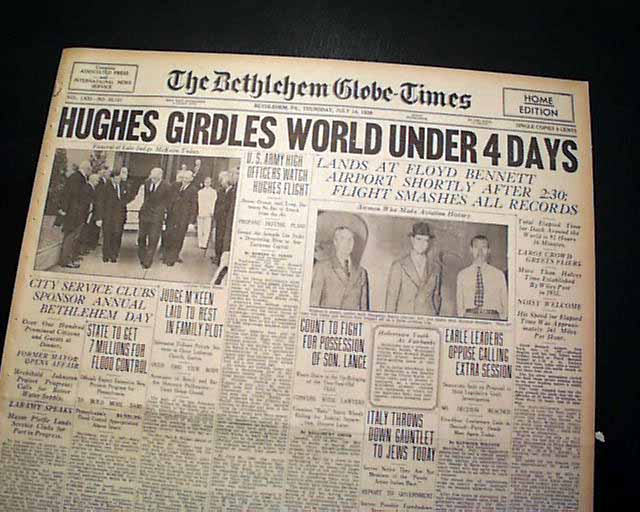 This 20 page newspaper has a great banner headline on the front page:

with subheads and related photo (see photos). Early, same day, 1st report coverage on the historic flight around the World by Howard Hughes.

Other news, sports and advertisements of the day. Very minor margin wear, otherwise in nice condition.

wikipedia notes: On 10 July 1938 Hughes set another record by completing a flight around the world in just 91 hours (3 days, 19 hours), beating the previous record by more than four days. For this flight he did not fly an aircraft of his own design but a Lockheed Super Electra (a twin-engine transport with a four-man crew) fitted with all of the latest radio and navigational equipment. Hughes wanted the flight to be a triumph of technology, illustrating that safe, long-distance air travel was possible. In 1938, the William P. Hobby Airport in Houston, Texas, known at the time as Houston Municipal Airport, was re-named "Howard Hughes Airport," but the name was changed back after people objected to naming the airport after a living person.