Home > Back to Search Results > Ludlow, CO mine massacre...
Click image to enlarge 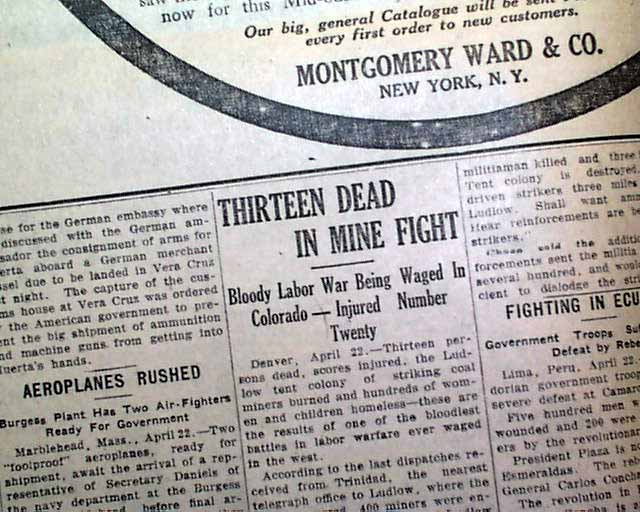 This 12 page newspaper has one column headlines on the back page: "THIRTEEN DEAD IN  MINE FIGHT" and
"Bloody Labor War Being Waged In Colorado--Injured Number Twenty". 1st report coverage on the Ludlow Massacre in Colorado. Other news of the day. Light browning, minor spine wear, otherwise good condition.

wikipedia notes: On the morning of April 20, the day after Greek Easter celebrated by the many Greek immigrants at Ludlow, three Guardsmen appeared at the camp ordering the release of a man they claimed was being held against his will. This request prompted the camp leader, Louis Tikas, to meet with a local militia commander at the train station in Ludlow village, a half mile (0.8 km) from the colony. While this meeting was progressing two companies of militia installed a machine gun on a ridge near the camp and took a position along a rail route about 800 yards (732 m) south of Ludlow. Anticipating trouble, Tikas ran back to the camp. The miners, fearing for the safety of their families, set out to flank the militia positions. A firefight soon broke out.

The fighting raged for the entire day. The militia was reinforced by non-uniformed mine guards later in the afternoon. At dusk, a passing freight train stopped on the tracks in front of the Guards' machine gun placements, allowing many of the miners and their families to escape to an outcrop of hills to the east called the "Black Hills." By 7:00 p.m., the camp was in flames, and the militia descended on it and began to search and loot the camp. Louis Tikas, the Ludlow camp's main organizer, had remained in the camp the entire day and was still there when the fire started. Tikas and two other men were captured by the militia. Tikas and Lt. Karl Linderfelt, commander of one of two Guard companies had confronted each other several times in the previous months. While two militiamen held Tikas, Linderfelt broke a rifle butt over his head. Tikas and the other two captured miners were later found shot dead. Their bodies lay along the Colorado and Southern tracks for three days in full view of passing trains. The militia officers refused to allow them to be moved until a local of a railway union demanded the bodies be taken away for burial.

During the battle, four women and eleven children had been hiding in a pit beneath one tent where they were trapped when the tent above them caught fire. Two of the women and all of the children suffocated. These deaths became a rallying cry for the UMWA, who called the incident the "Ludlow Massacre".

In addition to the fire victims, Louis Tikas and the other men shot dead, three company guards and one militiaman were also killed in that day's fighting.