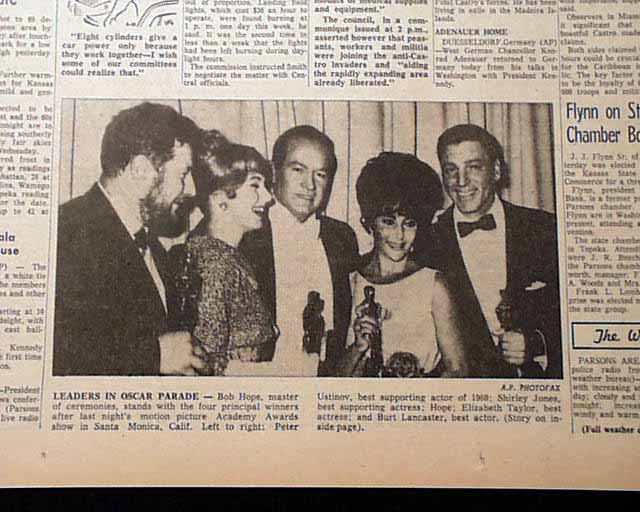 This 12 page newspaper has a four column photo at the bottom of the front page with caption: "Leaders In Oscar Parade" with shows some of the winners that year including Elizabeth Taylor (see photos).

This newspaper contains other news of the day including various advertisements. There are a few small binding holes along the spine, but it is otherwise in nice condition.

wikipedia notes: BUtterfield 8 is a 1960 Metrocolor drama film directed by Daniel Mann, starring Elizabeth Taylor and Laurence Harvey. Taylor (28 years old) won an Academy Award for her performance. The film was based on a 1935 novel written by John O'Hara in the wake of the success of his critically acclaimed Appointment in Samarra.

The screenplay was adapted by John Michael Hayes and Charles Schnee from the 1935 novel, but the plot of the film bears only a superficial resemblance to the novel's. O'Hara based parts on the mysterious death of Starr Faithfull in Long Beach, Nassau County, New York in 1931. Faithfull's body was found on a beach, apparently from drowning. In the novel the heroine is killed by falling under the paddlewheel of a steamboat.