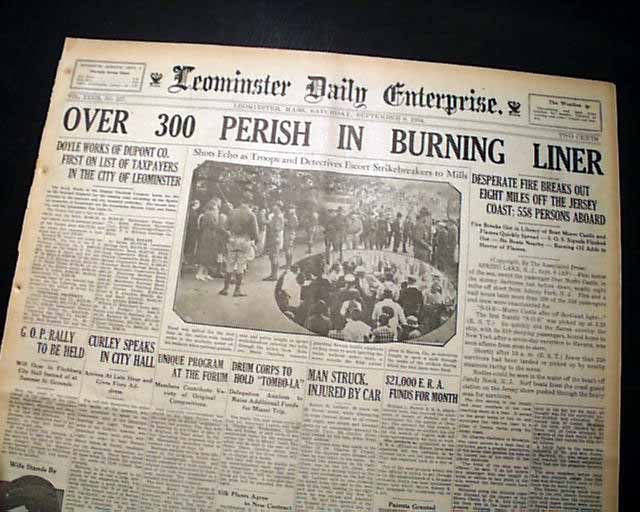 This 8 page newspaper has a nice banner headline on the front page: "OVER 300 PERISH IN BURNING LINER" with subheads (see photos). Early 1st report coverage on the SS Morro Castle fire disaster.

This issue contains other news, sports and advertisements of the day. Although it has light browning and minor margin wear it is otherwise in good condition.

wikipedia notes: The final voyage of Morro Castle began in Havana on September 5, 1934. On the afternoon of the 6th, as the ship paralleled the southeastern coast of the United States, it began to encounter increasing clouds and wind. By the morning of the 7th, the clouds had thickened and the winds had shifted to easterly, the first indication of a developing nor'easter. Throughout that day, the winds increased and intermittent rains began, causing many to retire early to their berths. Early that evening, Captain Robert Willmott had his dinner delivered to his quarters. Shortly thereafter, he complained of stomach trouble and, not long after that, died of an apparent heart attack. Command of the ship passed to the Chief Officer, William Warms. During the overnight hours, the winds increased to over 30 miles per hour as the Morro Castle plodded its way up the eastern seaboard.
SS Morro Castle on fire
SS Morro Castle on fire

Shortly before 3 a.m., a fire was detected in a storage locker within the First Class Writing Room on B Deck. Within the next 30 minutes, the Morro Castle became engulfed in flames. As the fire grew in intensity, Acting Captain Warms attempted to beach the ship, but the growing need to launch lifeboats and abandon ship forced him to abandon this strategy. Within 20 minutes of the fire's discovery (at approximately 3:10), the main electric cable burned through, plunging the ship into darkness. At about the same time, the wheelhouse lost the ability to steer the ship, as those hydraulic lines were severed by the fire as well.[1] Cut off by the fire amidships, passengers tended to gravitate toward the stern. Most crew members, on the other hand, moved to the forecastle.[1] On the ship, no one could see anything. In many places, the deck boards were hot to the touch, and it was hard to breathe through the thick smoke. As conditions grew steadily worse, the decision became either "jump or burn" for many passengers. However, jumping into the water was problematic as well. The sea, whipped by high winds, churned in great waves that made it extremely difficult to swim.

On the decks of the burning ship, the crew and passengers exhibited the full range of reactions to the disaster at hand. Some crew members were incredibly brave as they tried to fight the fire. Others tossed deck chairs and life rings overboard to provide persons in the water with makeshift flotation devices.[1] Only six of the ship's 12 lifeboats were launched -- boats 1, 3, 5, 9 and 11 on the starboard side and boat 10 on the port side. Although the combined capacity of these boats was 408, they carried only 85 people, most of whom were crew members. Many passengers died for lack of knowledge on how to use the life preservers. As they hit the water, life preservers knocked many persons unconscious, leading to subsequent death by drowning, or broke victims' necks from the impact, killing them instantly.[1]

The rescuers were slow to react. The first rescue ship to arrive on the scene was the SS Luckenbach. Two other ships — the SS Monarch of Bermuda and the SS City of Savannah — were slow in taking action after receiving the SOS, but eventually did arrive on the scene. A fourth ship to participate in the rescue operations was the SS President Cleveland, which launched a motor boat that made a cursory circuit around the Morro Castle and, upon seeing nobody in the water along her route, retrieved her motor boat and left the scene.

The Coast Guard vessels Tampa and Cahoone positioned themselves too far away to see the victims in the water and rendered little assistance. The Coast Guard's aerial station at Cape May, New Jersey failed to send their float planes until local radio stations started reporting that dead bodies were washing ashore on the New Jersey beaches from Point Pleasant Beach to Spring Lake.

In time, additional small boats arrived on the scene. The major problem was that in the large ocean swells, it was very difficult to see people in the water. A plane piloted by Harry Moore, Governor of New Jersey and Commander of the New Jersey Guard, helped boats locate survivors and bodies by dipping its wings and dropping markers.[1]
SS Morro Castle after the fire
SS Morro Castle after the fire

As news of the disaster spread along the Jersey coast by telephone and radio stations, local citizens assembled on the coastline to retrieve the dead, nurse the wounded, and try to unite families that had been scattered between different rescue boats that landed on the New Jersey beaches.

By mid-morning, the ship was totally abandoned and its hull drifted ashore, coming to a stop in shallow water off Asbury Park, New Jersey where the fires smoldered for the next two days. In the end, 135 passengers and crew (out of a total of 549) were lost. The ship was declared a total loss, and its charred hulk was finally towed away from the Asbury Park shoreline on March 14, 1935 to be sold for scrap. In the intervening months, because of its proximity to the boardwalk, from which it was possible to wade out and touch the wreck with one's hands, it was treated as a destination for sightseeing trips, complete with stamped penny souvenirs and postcards for sale.