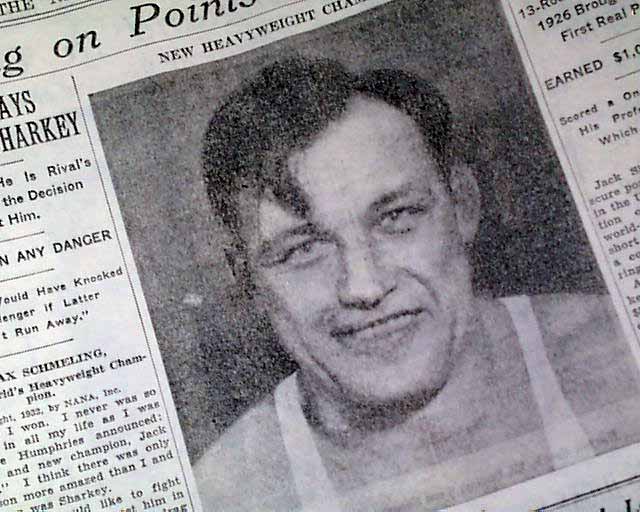 This 46 page newspaper has one column headlines on the front page that include: "70,000 SEE SHARKEY OUTPOINT SCHMELING TO WIN WORLD TITLE", "Boston Heavyweight Triumphs Over German in 15 Rounds in New Bowl", "OFFICIALS VOTE 2 TO 1" and and more (see photos) Much, much more on pages 28 & 29 with headlines, photos and round by round coverage. Loads of text, too much to photograph here.

Page 12 has a one column heading: "TESLA, INVENTOR, 75, ATTACKS DRY LAW" and more. Other news, sports and advertisements of the day throughout.

wikipedia notes: On June 21, 1932, the championship picture became even more muddled when Sharkey won a highly controversial split decision, taking the championship. Many in attendance, including Gene Tunney and the mayor of New York, felt that Schmeling had proven himself the better man and was robbed. In losing the championship, the German had managed to elevate his reputation in the minds of boxing fans.