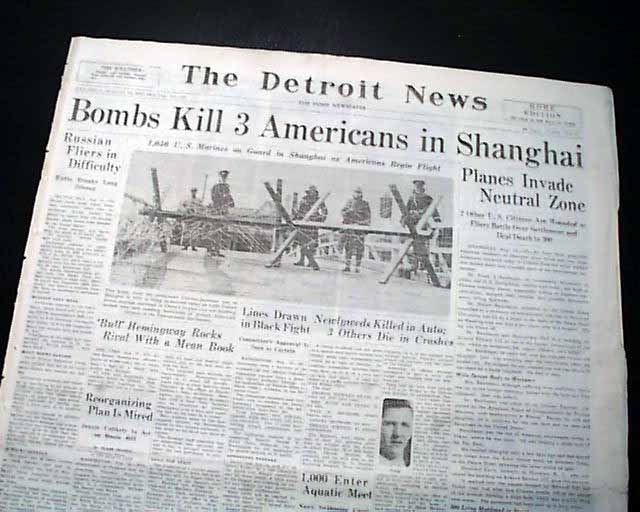 This 20 page newspaper has a banner headline on the front page: "Bombs Kill 3 Americans in Shanghai" with subheads and related photo (see photos).

Other news of the day throughout including sports and various advertisements. Rag edition in nice condition.

wikipedia notes: The battle can be divided into three stages, and eventually involved nearly one million troops. The first stage lasted from August 13 to August 22, during which the Chinese army attempted to eradicate Japanese troop presence in downtown Shanghai. The second stage lasted from August 23 to October 26, during which the Japanese launched amphibious landings at Jiangsu coast and the two armies fought a Stalingrad-type house-to-house battle, with the Japanese attempting to gain control of the city and the surrounding regions. The last stage, ranging from October 27 to the end of November, involved the retreat of the Chinese army in the face of Japanese flanking maneuvers, and the ensuing combat on the road to China's capital, Nanjing.