Home > Back to Search Results > George Washington's Birthday in 1791...
Click image to enlarge 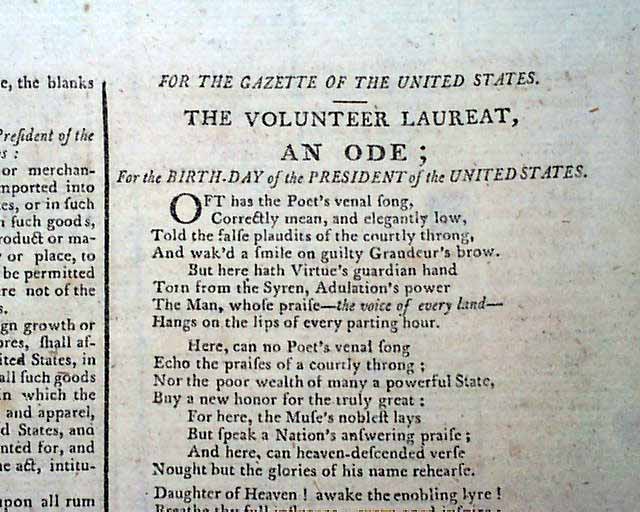 GAZETTE OF THE UNITED STATES, Philadelphia, Feb. 23, 1791  Front page reporting from "Congress" is concerning: "The Bank Bill under consideration" which carries over to take much of page 2.
Page 3 has "An Ode - For the Birth Day of the President of the United States" followed by a report from Phila. beginning: "Yesterday being the anniversary of the birth day of the President of the United States when he attained to the 59th year of his age..." with more (see).
The back page has continued reporting on the: "Report of the Secretary of the Treasury on the subject of a Mint". Also the bkpg. has an ad for: "Manuel Noah, Broker...". Noah was Jewish and the father of the very prominent Mordecai Manuel Noah, referred to as the most influential Jew in the United States in the early 19th century.
Four pages, a minor margin mend to page 2, very nice, clean condition.