Home > Back to Search Results > Jefferson memorial dedicated in 1943...
Click image to enlarge 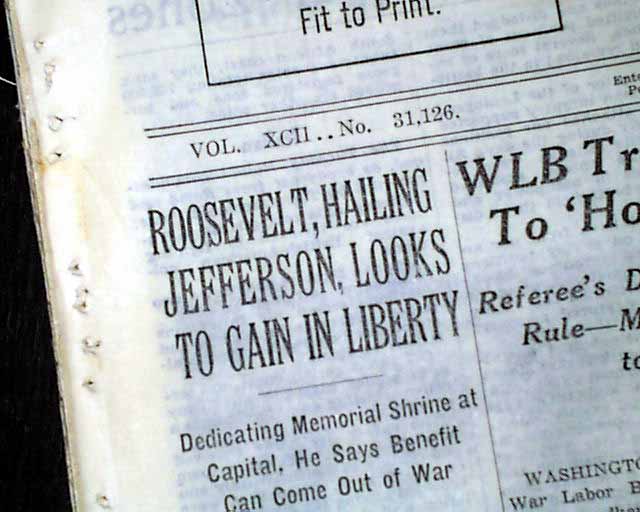 This 46 page newspaper has one column headlines on the front page that include: "ROOSEVELT, HAILING JEFFERSON, LOOKS TO GAIN IN LIBERTY", "Dedicating Memorial Shrine at Capital, He Says Benefit Can Come Out of War" and more. Much more on page 16 with photos of the site.

wikipedia notes: The Thomas Jefferson Memorial is a presidential memorial in Washington, D.C. that is dedicated to Thomas Jefferson, an American Founding Father and the third president of the United States. The neoclassical building was designed by John Russell Pope. It was built by Philadelphia contractor John McShain and was completed in 1943. When completed, the memorial occupied one of the last significant sites left in the city.

Composed of circular marble steps, a portico, a circular colonnade of Ionic order columns, and a shallow dome, the building is open to the elements. Pope made references to the Roman Pantheon and Jefferson's own design for the Rotunda at the University of Virginia. It is situated in West Potomac Park, on the shore of the Tidal Basin of the Potomac River. The Jefferson Memorial and the White House located directly north, form one of the main anchor points in the area of the National Mall in D.C. The Washington Monument just east of the axis on the national Mall was intended to be located at the intersection of the White House and the site for the Jefferson Memorial to the south but soft swampy ground which defied nineteenth century engineering required it be sited to the east. The Jefferson Memorial is managed by the National Park Service under its National Mall and Memorial Parks division.