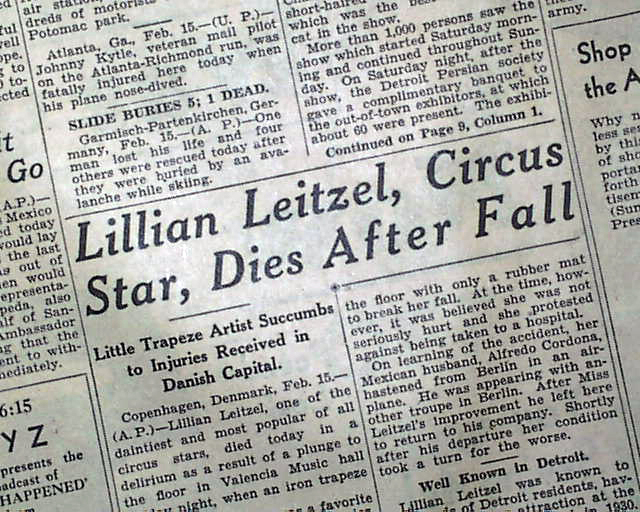 This 24 page newspaper has a one column headline near the bottom of the front page: "Lillian Leitzel, Circus Star, Dies After Fall"
with subhead: "Little Trapeze Artist Succumbs to Injuries Received in Danish Capital".

Other news of the day throughout including sports and advertisements. Light browning but otherwise in good condition.

wikipedia notes: Lillian Leitzel (January 2, 1892, Breslau, Germany – February 15, 1931) was an acrobat and strongwoman for the Ringling Brothers and Barnum and Bailey Circus.
On February 13, 1931, she fell to the ground from her rigging while performing in Copenhagen, Denmark when the swivel that held the rope in place crystallized and snapped. She and Codona had been performing in Europe separately, and he rushed to Copenhagen. They boarded a train to return to Berlin where Codona had a commitment. However, she died on February 15, two days after the fall, aged 39. In 1937, Codona shot Vera Bruce, his third wife, from whom he had just been divorced, and then he killed himself, also by gunshot.