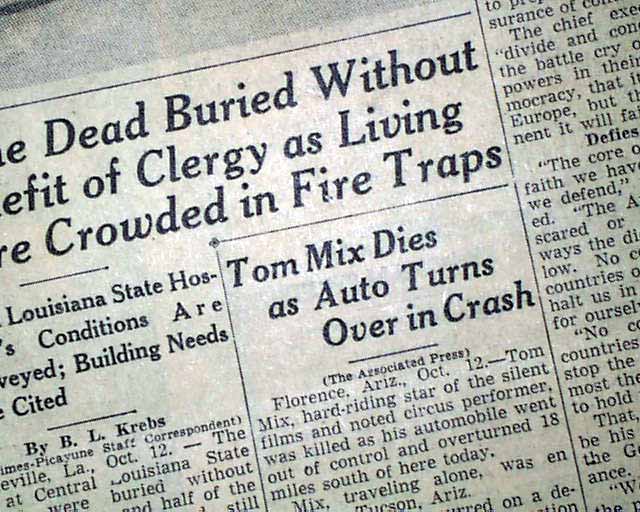 This 50+ page newspaper has a small one column headline on the front page: "Tom Mix Dies as Auto Turns Over in Crash". 1st report coverage on the death of famous Western movie actor, Tom Mix.

Other news, sports and advertisements of the day. Light browning a little spine wear, otherwise good.

wikipedia notes: Thomas Edwin "Tom" Mix (born Thomas Hezikiah Mix; January 6, 1880 – October 12, 1940) was an American film actor and the star of many early Western movies. He made a reported 336 films between 1910 and 1935, all but nine of which were silent features. He was Hollywood’s first Western megastar and is noted as having helped define the genre for all cowboy actors who followed. He bears a resemblance to current actor, Woody Harrelson.

On the afternoon of October 12, 1940, Mix was driving his 1937 Cord 812 Phaeton near Florence, Arizona, (between Tucson and Phoenix) on Arizona State Route 79 when he came upon construction barriers at a bridge previously washed away by a flash flood. A work crew watched as he was unable to brake in time and his car slid into a gully. A large polished aluminum suitcase he had put on the seat behind him flew forward and struck Mix in the back of the head, shattering his skull and breaking his neck. The 60-year-old actor was killed almost instantly. Accounts vary as to whether Mix was speeding before the accident and as to whether alcohol consumption by Mix may have played a role.

The site of his death is located on what is now State Route 79. There is a historical marker and the gully is named Tom Mix Wash. Mix is interred in the Forest Lawn Memorial Park Cemetery in Glendale, California.