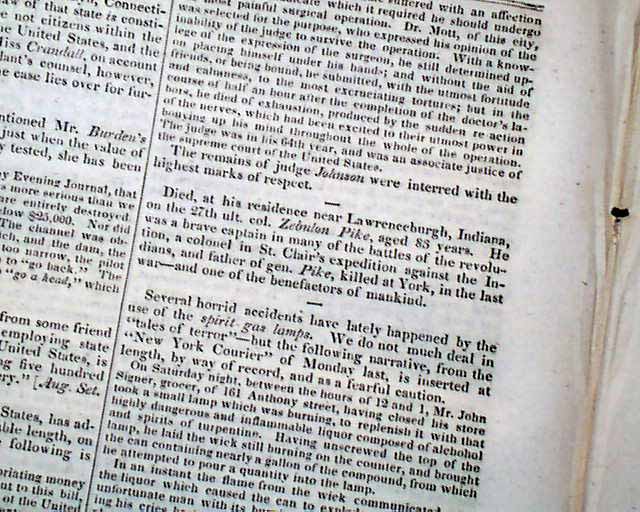 
NILES' WEEKLY REGISTER, Baltimore, August 9, 1834  Page 2 reports on "The new coinage..." describing the new gold coins being produced: "On the face the new coins will be readily distinguished by a head of  liberty, disencumbered of a cap. On the reverse the surplus motto "E pluribus unum", which for many years has occupied a portion of the disk above the eagle, is now omitted..." with more, including a comment: "It is seen with regret that liberty has been deprived of her cap, & the words 'E pluribus unum' are omitted on the new gold coins. There is an apparent hurry in getting out these coins...".
Another page has a report: "Died, at his residence near Lawrenceburgh, Indiana...col. Zebulon Pike, aged 83 years. He was a brave captain in many of the battles of the revolution, a colonel in St. Clair's expedition against the Indians...".
Further to the back are letters signed in type by: James Madison, and J.C. Calhoun.
Sixteen pages, 6 3/4 by 10 1/2 inches, and in generally nice condition.