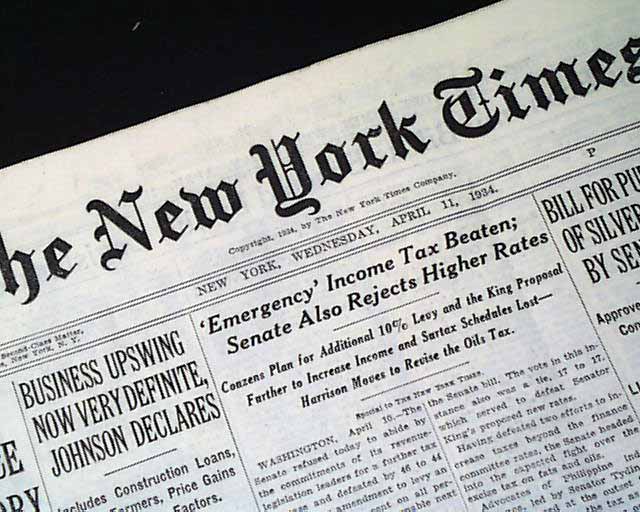 This 44 page newspaper has a banner headline on page 27 that reads: "16,500 See Chicago Triumph in Overtime to Capture World's Hockey Title" with subheads that include: "HAWKS SCORE, 1-0; WIN STANLEY CUP" "March's Drive After 30:05 of Overtime Beats Detroit and Ends Hockey Title Series"  and more with smaller subheads & lineup. See photos for more details.

1st report coverage on the Chicago Blackhawks winning their very 1st Stanley Cup hockey title. Nice to have in this famous NYC title.

Be the envy of your fellow Chicago fan buddies with a truly historic, original item from when the Blackhawks won their first hockey title only seven years after being founded.

Other news, sports and advertisements of the day throughout. Rag edition in great condition

wikipedia notes: The Chicago Blackhawks are a professional ice hockey team based in Chicago, Illinois. They are members of the Central Division of the Western Conference of the National Hockey League (NHL). They have won three Stanley Cup Championships and fourteen division titles since their founding in 1926. The Blackhawks are one of the Original Six NHL teams, along with the Boston Bruins, Montreal Canadiens, Toronto Maple Leafs, New York Rangers and Detroit Red Wings. Since 1994, the Blackhawks have played their home games at the United Center after having spent over 60 years playing at Chicago Stadium.

The Hawks' first season was a moderate success. They played their first game on November 17 when they played the Toronto St. Patricks at what was called the Chicago Coliseum at the time. The Black Hawks won their first game by beating the St. Patricks 4 to 1. They ended up finishing the season in 3rd place with a record of 19-22-3. The Black Hawks lost their 1927 first-round playoff series to the Boston Bruins, who had made the playoffs for the first time ever.

Following the series, McLaughlin fired head coach Pete Muldoon. According to Jim Coleman, sportswriter for the Toronto Globe and Mail, McLaughlin felt the 'Hawks were good enough to finish first. Muldoon disagreed, and in a fit of pique, McLaughlin fired him. According to Coleman, Muldoon responded by yelling, "Fire me, Major, and you'll never finish first. I'll put a curse on this team that will hoodoo it until the end of time." The Curse of Muldoon was born - although Coleman admitted years after the fact that he had fabricated the whole incident - and became one of the first widely-known sports "curses." While the team would go on to win three Stanley Cups in its first 39 years of existence, it did so without having finished in first place, either in a single- or multi-division format.

The Black Hawks proceeded to have the worst record in the league in 1927–28. By 1931, they reached their first Stanley Cup Final, with goal-scorer Johnny Gottselig, Cy Wentworth on defense, and Charlie Gardiner in goal, but fizzled in the final two games against the Montreal Canadiens. Chicago had another stellar season in 1932, but that did not translate into playoff success. However, two years later, Gardiner led his team to victory by shutting out shutting out the Detroit Red Wings in the final game of the Stanley Cup. The score, after double overtime, was 1-0.