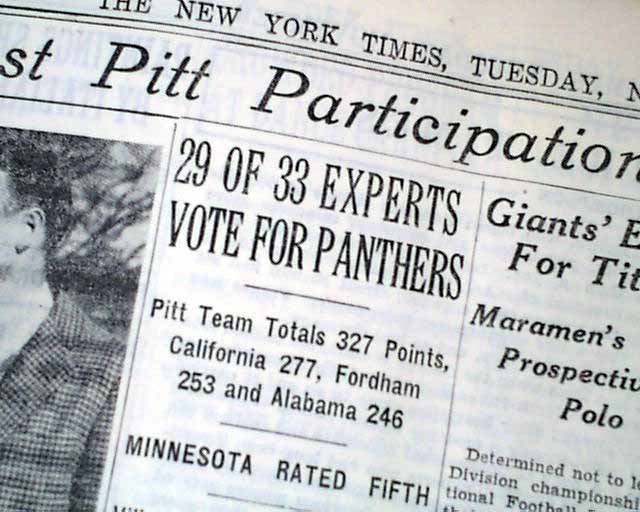 This 48 page newspaper has one column headlines in the sport's section (page 28) that include:

with standings. (see images) 1st report coverage on the Pitt Panthers officially being named national champions of college football by the associated press (AP poll). This was only the second year that the AP poll was in effect.

wikipedia notes: The 1937 college football season ended with the Panthers of the University of Pittsburgh being named the nation’s #1 team (and mythical national champion) by 30 of the 33 electors in the Associated Press writers' poll. The AP poll was in its second year, and seven votes were taken during the final weeks of the 1937 season, starting with October 18.

Each writer listed his choice for the top ten teams, and points were tallied based on 10 for first place, 9 for second, etc., and the AP then ranked the twenty teams with the highest number of points. With 33 writers polled, Pitt received 30 first place votes and 3 second-place, for a total of 327 points. Major conferences that existed in 1936 were the Western Conference (today's Big Ten), the Pacific Coast Conference (now the Pac-10), the Southeastern Conference (SEC), the old Southern Conference (whose members later played in the ACC), the Big Six (later the Big 8) and the Southwest Conference.