Home > Back to Search Results > Sinking of the USS Reuben James...
Click image to enlarge 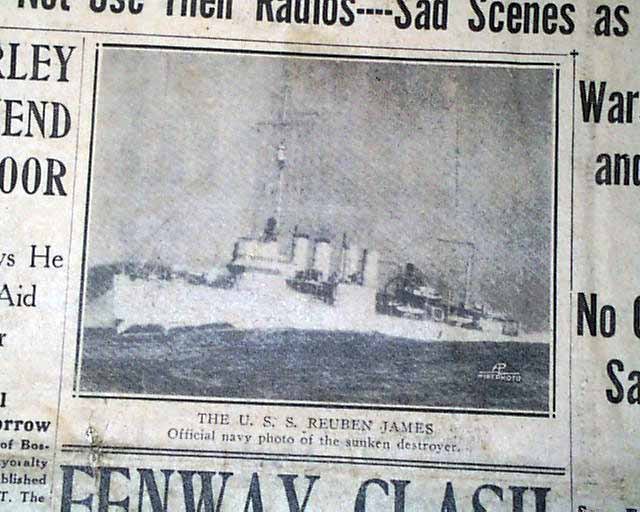 Sinking of the USS Reuben James...

This 16 page newspaper has a nice five column headline on the front page: "RESCUE 44 MEN OF SUNKEN DESTROYER" with subheads and photo. Coverage on the sinking of the USS Reuben James, 1st U.S. naval ship sunk in World War II.

Reuben James was laid down on April 2, 1919 by the New York Shipbuilding Corporation of Camden, New Jersey, launched on October 4, 1919, and commissioned on 24 September 1920 with Commander Gordon W. Hines in command.

Assigned to the Atlantic Fleet, Reuben James saw duty in the Mediterranean Sea from 1921 to 1922. Based then at New York City, she patrolled the Nicaraguan coast to prevent the delivery of weapons to revolutionaries in early 1926. She was decommissioned at Philadelphia, Pennsylvania, on January 20, 1931. Recommissioned on March 9, 1932, the ship again operated in the Atlantic and the Caribbean, patrolling Cuban waters during the coup by Fulgencio Batista. She transferred to San Diego, California in 1934. Following maneuvers that evaluated aircraft carriers, Reuben James returned to the Atlantic Fleet in January 1939.

Upon the outbreak of war in Europe in September 1939, she joined the Neutrality Patrol, and guarded the Atlantic and Caribbean Sea approaches the American coast. In March 1941, Reuben James joined the convoy escort force established to promote the safe arrival of war material to the United Kingdom. This escort force guarded convoys as far as Iceland, where they became responsibility of British escorts.

Based at Hvalfjordur, Iceland, she sailed from Naval Station Argentia, Newfoundland on 23 October 1941, with four other destroyers to escort eastbound convoy HX-156. While escorting that convoy at about 0525, 31 October 1941, Reuben James was torpedoed by German submarine U-552 near Iceland. Reuben James had positioned herself between an ammunition ship in the convoy and the known position of a "wolfpack". Reuben James was hit forward by a torpedo and her entire bow was blown off when a magazine exploded. The bow sank immediately. The aft section floated for five minutes before going down. Of the crew, 44 survived and 115 died.

Woody Guthrie wrote "The Sinking of the Reuben James", which he performed with Pete Seeger and the other Almanac Singers. The Guthrie song has an original tune for its chorus, but its verses are set to the tune of the song "Wildwood Flower".