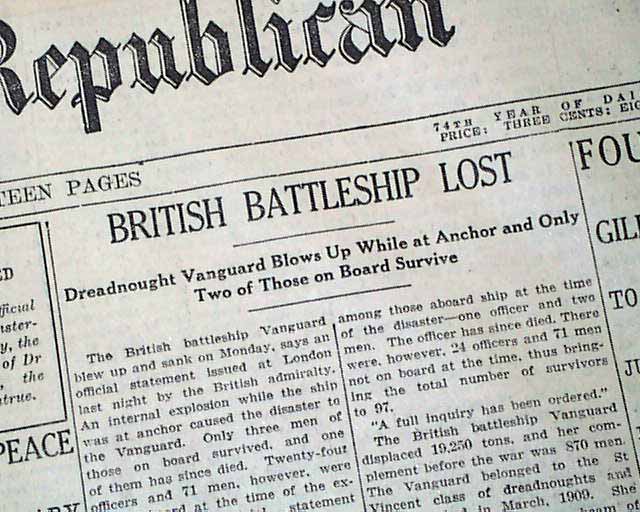 This 16 page newspaper has two column headlines on the front page: "BRITISH BATTLESHIP LOST" and "Dreadnought Vanguard Blows Up While at Anchor and Only Two of Those on Board Survive".

1st report coverage of the explosion disaster of the HMS Vangaurd (1909) in which 804 were killed.

wikipedia notes: In July of 1917, the ship's crew had been exercising, practising the routine for abandoning ship. She anchored in the northern part of Scapa flow at about 18.30. There is no record of anyone detecting anything amiss until the moment of the explosion at 23.20.

A court of inquiry heard accounts from many witnesses on nearby ships. They accepted the consensus that there had been a small explosion with a white glare between the foremast and "A" turret, followed after a brief interval by two much larger explosions. The Court decided, on the balance of the available evidence, that the main detonations were in either "P" magazine, or "Q" magazine, or both. A great deal of debris thrown out by the explosion landed on nearby ships; a section of plating measuring some five feet by six feet landed on board Bellerophon. It was found possible to match it with a sister ship, and it was found to be from the central dynamo room, which reinforced the evidence suggesting that the explosion took place in the central part of the ship.

Although the explosion was obviously an explosion of the cordite charges in a main magazine, the reason for it was much less obvious. There were a number of theories. The inquiry found that some of the cordite on board, which had been temporarily offloaded in December 1916 and catalogued at that time, was past its stated safe life. The possibility of spontaneous detonation was raised, but could not be proved. It was also noted that a number of ship's boilers were still in use, and a number of the watertight doors which should have been closed in war-time, were open as the ship was in port. It was suggested that this might contribute to there being a dangerously high temperature in the magazines. The final conclusion of the board was that a fire started in a 4-inch magazine, perhaps when a raised temperature caused spontaneous ignition of cordite, spreading to one or the other main magazines which then exploded.