Home > Back to Search Results > Phar Lap arrives in America... to race a Aqua Caliente...
Click image to enlarge 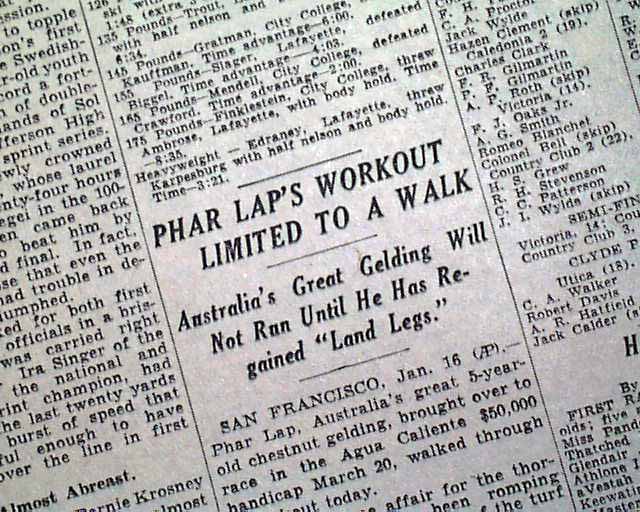 Phar Lap arrives in America... to race a Aqua Caliente...

This 100+ page Sunday newspaper has small one column headings on page s-6 (inside, near back): "PHAR LAP'S WORKOUT LIMITED TO A WALK" and "Australia's Great Gelding Will Not Run Until He Has Regained 'Land Legs'".  See photo for brief text.

Other news, sports and advertisements of the day throughout. A little margin wear, otherwise in good condition.

In 1930, someone (alleged to have been a bookmaker losing vast amounts of money) tried to shoot the horse.

For his final race in 1932, Phar Lap's owner shipped him by boat to a racetrack near Tijuana, Mexico, to compete in the Agua Caliente Handicap, which was offering the largest purse ever raced for in North America. Phar Lap won in track-record time while carrying 129 pounds (58.5 kg). From there, the horse was sent to a private ranch near Menlo Park, California, while his owner negotiated with racetrack officials for special race appearances.