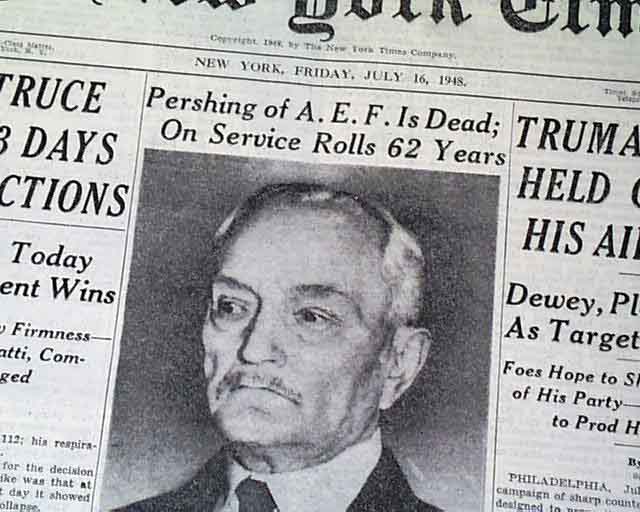 This 40 page newspaper has two column headlines on the front page: "Pershing of A. E. F. Is Dead; On Service Rolls 62 Years" and "Overseas Commander in First World War Was Only Officer Ranked as General of the Armies Since Washington" with nice nice photo of Pershing (see photos). Much more on pages 12 & 13. Loads of text, way too much to photograph here. This tells of the death of General John 'Black Jack' Pershing. Nice to have in this famous NYC title.

wikipedia notes: John Joseph "Black Jack" Pershing, GCB (Hon) (September 13, 1860 – July 15, 1948) was a general officer in the United States Army. Pershing is the only person to be promoted in his own lifetime to the highest rank ever held in the United States Army—General of the Armies (a retroactive Congressional edict passed in 1976 promoted George Washington to the same rank but with higher seniority). Pershing also holds the first United States officer service number (O-1). Pershing led the American Expeditionary Forces in World War I, and was regarded as a mentor by the generation of American generals who led the United States Army in Europe during World War II, including George C. Marshall, Dwight D. Eisenhower, Omar N. Bradley, and George S. Patton.