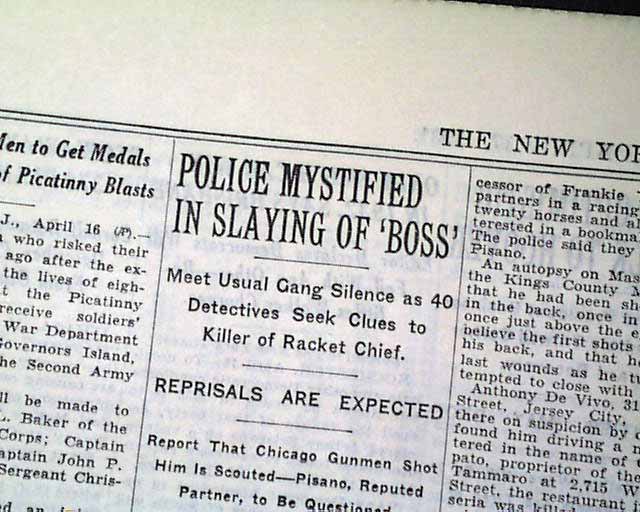 This 48 page newspaper has one column headlines on page 17 that include: "POLICE MYSTIFIED IN SLAYING OF 'BOSS'", "Most Usual Gang Silence as 40 Detectives Seek Clues to Killer of Racket Chief", "Reprisals Are Expected" and more (see photos).

This tells of the assassination of early Mafia boss, Joe Masseria in New York City. Great to have in this famous NYC title.

On April 15, 1931, Joe Masseria was assassinated at one of his favorite restaurants, Nuova Villa Tammaro in Coney Island, Gangland legend has it that Masseria dined with Charles "Lucky" Luciano before his death. While they played cards, Luciano excused himself to the bathroom, when Benjamin "Bugsy" Siegel, Vito Genovese, Albert Anastasia and Joe Adonis rushed in and shot Masseria to death, his four bodyguards having mysteriously disappeared. The New York Daily News reported that the boss died "with the ace of spades, the death card, clutched in a bejeweled paw."

However, both the New York Times and the New York Herald Tribune paint a different picture. Neither newspaper mentions Luciano being present, although Luciano was brought in for questioning by the police. The Herald Tribune reported that Masseria arrived at the restaurant in his armoured steel car in the company of three other men shortly before 3pm. Scarpato’s mother-in-law, Anna Tammaro, waited while they played cards. According to two eyewitnesses, two well-dressed young men drove up and parked their car at the curb. They strolled leisurely into the place, and the shooting began immediately. Some 20 shots were fired. Then the two gunmen came out without any visible signs of haste, entered their automobile and drove away. Masseria was hit with four bullets in the back and one in the back of the head, identified as .32 and .38 caliber, and in an alley next to the restaurant, police recovered two revolvers.