Home > Back to Search Results > Earthquake in Chile and Peru... a possible tsunami...
Click image to enlarge 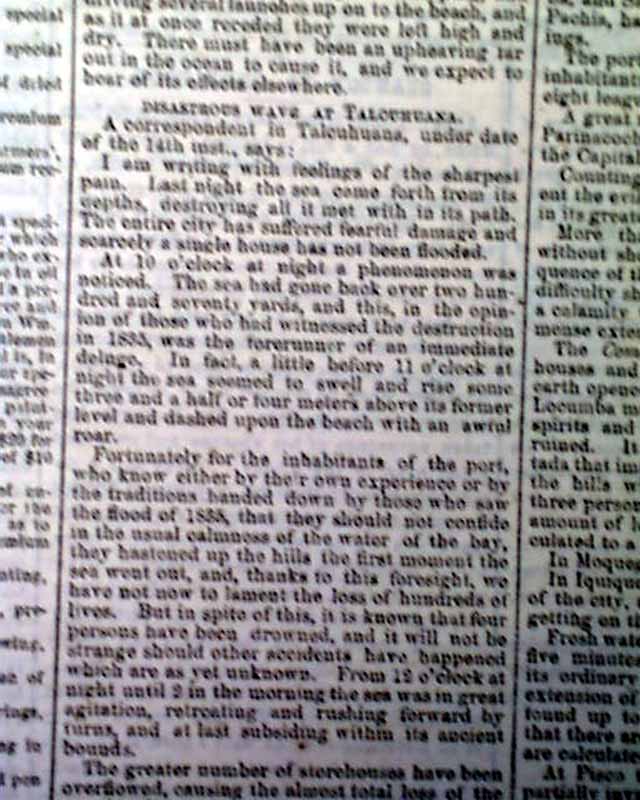 Earthquake in Chile and Peru... a possible tsunami...


SACRAMENTO DAILY UNION, Sacramento, California, September 28, 1868  The front page reports "The Great Earthquake in South America - Later and Fuller Particulars". Reports are from different areas along the coastline. Under the caption "Disastrous Wave at Talcuhuana", the description would appear to be the reporting of a tsunami. "At 10 o'clock at night a phenomenon was noticed. The sea had gone back over two hundred and seventy yards, and this, in the opinion of hose who had witnessed the destruction in 1835, was the forerunner of an immediate deluge. In fact, a little before 11 o'clock at night the sea seemed to swell and rise some three and a half or four meters above its former lever and dashed upon the beach with an awful roar. Fortunately for the inhabitants of the port... they hastened up the hills the first moment the sea went out, and, thanks to this foresight, we have not now to lament the loss of hundreds of lives...". The report is over a column and a half in length. The back page reports "The Ashburn Murder - Official Report of General Meade". Other news and advertisements are within.

This is complete in four pages with a slightly irregular spine, an archival mend from the reverse side to the front page, otherwise in good condition.