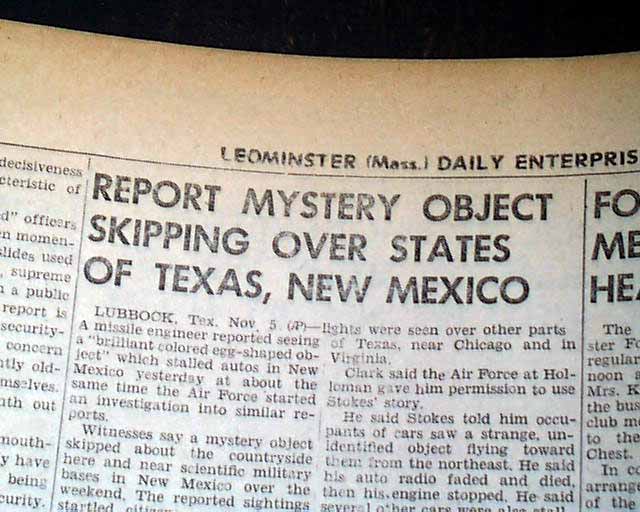 This 8 page newspaper has a two column headline on page 4: "REPORT MYSTERY OBJECT SKIPPING OVER STATES OF TEXAS, NEW MEXICO" which tells of a UFO sighting in New Mexico around the same time of the Levelland Texas UFO case.

Also on the same page is a two column headline that reads: "Observers May Be Able to Sight Sputnik 2d Tomorrow"

Other news of the day including various advertising. Complete with 8 pages, 16 by 22 inches, with minor spine wear, but otherwise in good condition.

wikipedia notes: The incident began late on the evening of November 2 when two immigrant farm workers, Pedro Saucedo and Joe Salaz, called the Levelland police department to report a UFO sighting. Saucedo told police officer A.J. Fowler, who was working the night desk at the police station, that they had been driving four miles (6 km) west of Levelland when they saw a blue flash of light near the road. They claimed their truck's engine died, and a rocket-shaped object rose up and approached the truck, which rocked from the object's blast. As it moved away the truck's engine restarted and worked normally. Believing the story to be a joke, Fowler ignored it. An hour later, motorist Jim Wheeler reported an egg-shaped object was sitting in the road, four miles (6 km) east of Levelland, blocking his path and glowing bright blue. He claimed his vehicle died and as he got out of his car the object took off and its lights went out. As it moved away, Wheeler's car restarted and worked normally.
Washington Evening Star on the incident.

At 10:55 pm a married couple driving northeast of Levelland reported that they saw a bright flash of light moving across the sky and their headlights and radio died for three seconds. Five minutes later Jose Alvarez met the strange object sitting on the road 11 miles (18 km) north of Levelland, and his vehicle's engine died until the object departed. At 12:05 am (November 3), a Texas Tech college student named Newell Wright was surprised when, driving 10 miles (16 km) east of Levelland, his car suddenly died. When he got out to check on the problem, he saw a "100-foot-long" egg-shaped object sitting in the road. It took off, and his engine started running again. At 12:15 am Officer Fowler received another call, this time from a farmer named Frank Williams who claimed the egg-shaped object's blue glow pulsated, and each time it glowed brightly, his engine died. Other callers were Ronald Martin at 12:45 am and James Long at 1:15 am.

By this time, several Levelland police officers were actively investigating the incident. Among them was Sheriff Weir Clem, who saw a brilliant red object moving across the sky at 1:30 am. At 1:45 am Levelland's Fire Chief, Ray Jones, also saw the object and his vehicle's lights and engine sputtered. The sightings apparently ended soon after this incident.