Home > Back to Search Results > On the capture of Jeff Davis...
Click image to enlarge 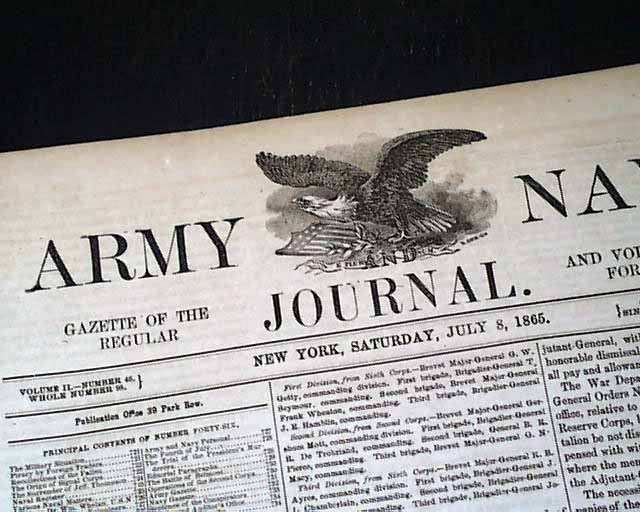 On the capture of Jeff Davis...


ARMY & NAVY JOURNAL,  New  York, July 8, 1865  As noted in the masthead this was the: "Gazette of The Regular & Volunteer Forces" and as such is replete with military news of all sorts. Most of the ftpg. is taken up with: "The Military Situation" which reports on some closing events in the Civil War. The ftpg. includes: "The Army of the Potomac" with a review of recent events, plus: "Piracy by Foreign Traders". Articles within include: "Recollections of the Fallen" "Naval Register" "Various Naval Matters", an interesting article which addresses the issue of Jeff David escaping in woman's clothes (see); "Southern Version of the Capture of Davis" "The Assault Upon Fort Blakely" "The Trial of the President's Murders" "The Battle of Belmont" and more.
Sixteen pages, 10 by 14 1/2 inches, nice condition.