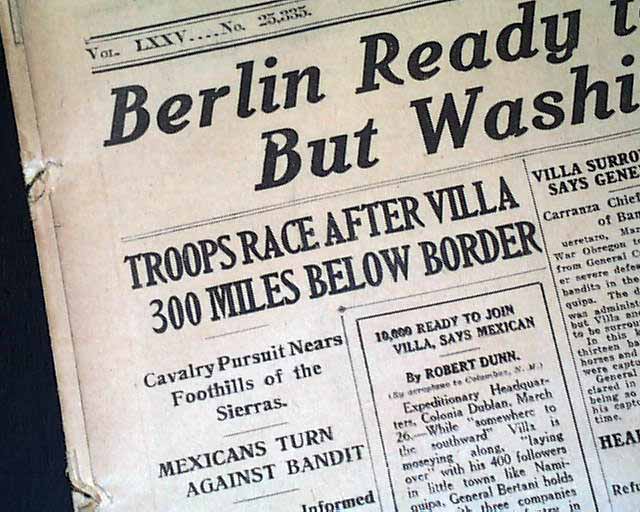 This 14 page newspaper has a two column headline on the front page: "TROOPS RACE AFTER VILLA 300 MILES BELOW BORDER", with subheads (see images).

Other news of the day throughout. Usual browning with a little margin wear and tear, otherwise good. Should be handled with care.

wikipedia notes: On March 9, 1916, on the orders of Mexican revolutionary leader Francisco "Pancho" Villa, General Ramon Banda Quesada led more than five hundred men in an attack against Columbus NM, which was garrisoned by a detachment of the U.S. 13th Cavalry Regiment. They seized 100 horses and mules, burned the town, killed 14 soldiers and 10 residents, and took much ammunition and weaponry before retreating back into Mexico. Quesada had five men captured and suffered the loss of 80 dead or mortally wounded, mostly from the U.S. machine gun emplacements.

United States President Woodrow Wilson responded to the Columbus raid by sending 10,000 troops under Brigadier General John J. Pershing to Mexico to pursue Villa. This was known as the Punitive Mexican Expedition or Pancho Villa Expedition. The expedition was eventually called off after failing to find Villa, who had successfully escaped.