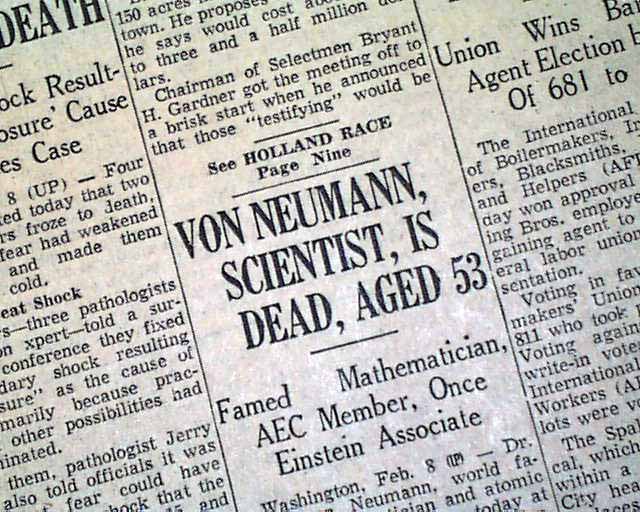 This 34 page newspaper has one column headlines on the front page: "VON NEUMANN SCIENTIST, IS DEAD, AGED 53", "Famed Mathematician, AEC Member, Once Einstein Associate", which is a 1st report on the death of John Von Neumann. Nice to have on the front page.

Other news of the day throughout. Light browning, otherwise nice.

wikipedia notes: John von Neumann (December 28, 1903 – February 8, 1957) was a Hungarian-born American mathematician who made major contributions to a vast range of fields, including set theory, functional analysis, quantum mechanics, ergodic theory, continuous geometry, economics and game theory, computer science, numerical analysis, hydrodynamics (of explosions), and statistics, as well as many other mathematical fields. He is generally regarded as one of the greatest mathematicians in modern history. The mathematician Jean Dieudonné called von Neumann "the last of the great mathematicians", while Peter Lax described him as possessing the most "fearsome technical prowess" and "scintillating intellect" of the century. Even in Budapest, in the time that produced geniuses like Theodore von Kármán (b. 1881), Leó Szilárd (b. 1898), Eugene Wigner (b. 1902), and Edward Teller (b. 1908), his brilliance stood out.