Home > Back to Search Results > Kaiser Wilhelm II of Germany dies in 1941...
Click image to enlarge 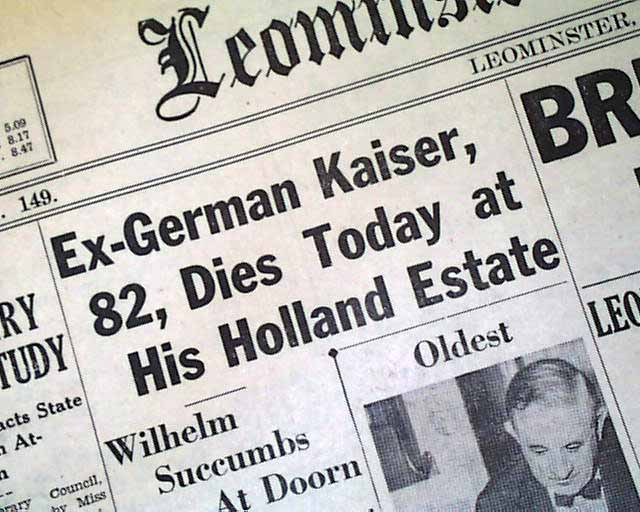 This 8 page newspaper has a two column headline on the front page:  "Ex-German Kaiser, 82, Dies Today at His Holland Estate", with subheads (see images). Tells of the death of Wilhelm II, German Emperor. Other news of the day. Minor spine wear, otherwise in good condition.

wikipedia notes: Wilhelm II died of a pulmonary embolus in Doorn, Netherlands on 4 June 1941 aged 82, with German soldiers at the gates of his estate. Hitler, however, was reportedly angry that the former monarch had an honour guard of German troops and nearly fired the general who ordered them there when he found out. Despite his personal animosity toward Wilhelm, Hitler hoped to bring Wilhelm's body back to Berlin for a state funeral, as Wilhelm was a symbol of Germany and Germans during World War I. Hitler felt this would demonstrate to Germans the direct succession of the Third Reich from the old Kaiserreich. However, Wilhelm's wishes of never returning to Germany until the restoration of the monarchy were respected, and the Nazi occupation authorities granted a small military funeral with a few hundred people present, the mourners including August von Mackensen, along with a few other military advisors. Wilhelm's request that the swastika and other Nazi regalia not be displayed at the final rites was ignored, however, and they feature in the photos of the funeral that were taken by a Dutch photographer.