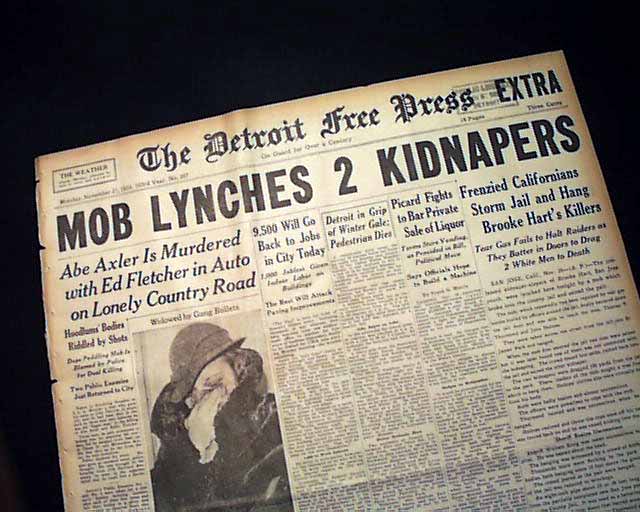 This 18 page newspaper has a great, bold banner headline on the front page: "MOB LYNCHES 2 KIDNAPERS" with subheads (see photos). Tells of the lynching of Thomas Thurmond and John H. Holmes for the murder of Brooke Hart in San Jose, California.

wikipedia notes: On the afternoon of Thursday, November 9, 1933, the twenty-two year old Brooke Hart was kidnapped while retrieving his Studebaker roadster from a downtown San Jose garage. He was driven in the car by his captors to what is now Milpitas. There they abandoned the Studebaker for another car, drove to the San Mateo-Hayward Bridge, where Hart was hit over the head with a concrete block and dumped into San Francisco Bay. At the time, the tide was out and there was only a few feet of water at the base of the bridge, so Thurmond and Holmes shot Hart, killing him. A few hours later, the Hart family was telephoned by Thurmond and Holmes, who demanded $40,000 for Hart's return, with further instructions to follow.

Brooke Hart had been kidnapped at the exit of the parking lot behind the family department store. A half hour later, a mother and daughter on a farm immediately south of Milpitas, California, about seven miles east of San Jose watched as a Studebaker President Convertible Roadster with two men in it stopped near their barn. Their description of the man driving, slender with light colored hair, matched the description of Brooke Hart, as did the Studebaker as his car. Moments later, a long-hooded dark sedan with four men in it skidded to a stop, and Brooke Hart was placed in the larger car with the four men and driven off. A fifth man followed in the Studebaker. Later that night, a man living in Milpitas reported that his wife had seen an abandoned convertible left with its lights on outside their home. The car was Brooke Hart's.

At 9:30 the same night, Miriam Hart, Hart's youngest sister, answered the telephone and was informed by a "soft-spoken man" that Hart had been kidnapped and that instructions for his return would be provided later. At 10:30, what sounded like the same man called and informed Miriam that her brother would be returned upon payment of $40,000. Delivery instructions would be provided the next day. However, the family was not contacted again until the following Monday, when a card, postmarked in Sacramento, arrived in the mail at the family department store. It instructed Hart's father, Alex Hart, to have a radio installed in the Studebaker (which already had a radio), because the ransom instructions would be broadcast over NBC radio station KPO. The kidnapper also instructed Alex Hart to be ready to drive the Studebaker to deliver the ransom. Alex Hart had never learned to drive.

On Tuesday, a second ransom note arrived, again postmarked in Sacramento. It instructed Alex Hart to place the ransom in a black satchel and drive to Los Angeles. That night, Alex Hart took a call from a man claiming to be his son's kidnapper who instructed him to take the night train to Los Angeles. The FBI staked out the train station and mistakenly arrested a bank teller out for an evening stroll. The next day, a sign was placed in a window of the Hart store stating that Alex Hart did not drive. A call was received that night again demanding that Alex Hart drive to deliver the ransom. Hart demanded proof that his son was with the caller. The caller stated that Brooke Hart was being held at a safe location. Because a phone tap had been placed on the Hart telephone, the call was traced to a garage in downtown San Jose, but the caller was gone by the time the authorities arrived.

Another ransom demand arrived the following day, November 15, again ordering Alex Hart to drive with the ransom. That night, another call was received and the demand that Alex Hart drive was repeated. The sheriff arrested Thomas Harold Thurmond near a pay phone in a parking garage 150 feet from the San Jose Police station at about 8 p.m. At 3:00 a.m., Thurmond, after hours of questioning, signed a confession in which he claimed to have bound Brooke Hart with wire and tossed him off the San Mateo Bridge into San Francisco Bay some time between 7:00 and 7:30 on the night of the kidnapping. He identified a recently unemployed salesman separated from his wife and two children as his accomplice. Jack Holmes was arrested in his SRO room at the California Hotel near the San Jose Police station at 3:30 a.m.

Early in the morning, because of lynch threats, the Santa Clara County sheriff moved Thurmond and Holmes to the Potrero Hill police station in San Francisco for safekeeping. At 1 o'clock the next afternoon, Holmes signed a confession admitting that he and Thurmond kidnapped Hart and threw him into San Francisco Bay. Later, the Santa Clara County District Attorney advised the press that, unless corroborated by independent evidence of the crime, confessions by Thurmond and Holmes in which each blamed the other for the crime were not admissible in a court of law.

The San Jose Police, the Santa Clara County Sheriffs office, and the U.S. Division of Investigation (the forerunner of the FBI) were quickly brought into the case. Hart's wallet was discovered in San Francisco, on the pier where the daily passenger ship to Los Angeles had just departed. The ship was stopped and searched upon arrival, but nothing was found.

Police officers from Santa Clara County, San Mateo County, and Alameda County began searching the bay around the bridge, hoping to find Hart's body. On November 26, two Redwood City residents discovered a badly decayed and crab-eaten body about a mile south of the bridge. Hart's body was identified by one of his friends later that day.

Meanwhile, local newspapers reported that Holmes and Thurmond had met with psychiatrists and would attempt to plead not guilty by reason of insanity. An angry crowd gathered in St. James Park, across the street from the county jail where the two men were being held. Sheriff William Emig contacted Governor James Rolph, asking that the National Guard be deployed to protect the prisoners. Rolph refused.

Upon learning of rumors of a possible insanity plea on the part of Thurmond, law enforcement authorities directed two psychiatrists from Agnews State Mental Hospital in Santa Clara, California to examine both Thurmond and Holmes to preclude such a defense. Following cursory examinations in their cells at the Santa Clara County jail in San Jose, with a mob outside in the jail courtyard, both men were declared sane.

It was reported that Sheriff Emig had asked Governor Rolph to call out the National Guard, and that he had demurred. Upon payment of $10,000 cash by the father of Jack Holmes--an astonishing sum in 1933--San Francisco attorney Vincent Hallinan agreed to represent his son. With a volatile mob increasing day and night outside the jail. on the Saturday before what turned out to be the day of the lynching, Hallinan called Rolph and asked that he call out the National Guard should an effort be made to lynch his client. Rolph retorted that he would "pardon the lynchers." Later the same day, he informed shocked reporters that he would refuse to dispatch the Guard.

Early the next morning, Sunday, two duck hunters found the badly decomposed body south of the San Mateo Bridge near Hayward, California. Word went out immediately throughout northern California. Incessantly throughout the day and into the evening, radio stations issued inflammatory announcements that a lynching would occur that night in St. James Park in San Jose. By 9:00 p.m., a mob estimated by the press to range anywhere from 5,000 to 15,000 men, women, and children were jammed into the park, with an estimated 3,000 abandoned vehicles left on streets nearby. Governor Rolph was in regular telephonic communication with Raymond Cato, whom he had appointed to head the California Highway Patrol. Cato was ensconced in the home of a Rolph political ally and neighbor in the mountains west of San Jose with an open phone line to the jail. As the assault on the jail commenced about 9:00 p.m., Governor Rolph canceled a planned trip to the Western Governors' conference in Boise, Idaho to prevent his chief political rival, Lieutenant Governor Frank Merriam, from calling out the National Guard to stop the lynchings.

By midnight, November 27, thousands had gathered outside the jail, while the sheriff's deputies fired tear gas into the crowd in an attempt to disperse them. However, the crowd became angrier and larger. The nearby construction site at the post office (intended to replace the previous post office, which is now the San Jose Museum of Art) was raided for materials to make a battering ram. Emig ordered his officers to abandon the bottom two floors of the jail, where Thurmond and Holmes were being held. The mob, by this time estimated at 6,000-10,000 (other reports are of 3,000-5,000), stormed the jail, took Holmes and Thurmond across the street to St. James Park, and hanged them. Child movie star, Jackie Coogan (a friend of Brooke Hart from Santa Clara University) was reported to be one of the mob that prepared and held the rope for lynching. [2]

According to the San Francisco Chronicle, on December 2, after a special meeting of the city council heard testimony in support of leaving the tree as a monument and warning to evil doers, the council approved the cutting down of the cork elm by city workers. Police were required to keep off a crowd of souvenir hunters seeking a twig or branch of the infamous "gallows tree", the bark and lower branches having been hacked and stripped for mementos.

Governor Rolph praised the action, stating that California had sent a message to future kidnappers, and promised to pardon anyone involved in the lynching. However, Rolph died on June 2, 1934, before any charges had been filed in the case. Alameda County District Attorney Earl Warren was the strongest supporter of prosecution for the lynching; eventually seven people were arrested for the lynchings, but none were convicted.

In 1934, the Nazis used photographs of the lynchings as propaganda to show that lawless mobs in America were supporting the interests of Jews -- Brooke Hart's father was Jewish, his mother Catholic. The movie Fury (1936), directed by Fritz Lang, was based on a fictionalized version of the story.

In the aftermath of the lynching, Governor Rolph was publicly condemned by former President Herbert Hoover, then at Stanford University in Palo Alto, California. Rolph struck back instantly, accusing Hoover of calling out the U.S. Army against the World War I "Bonus Marchers" who had gathered in Washington, D.C. in 1932 to protest lack of assistance to the veterans of that war. President Roosevelt also condemned the lynching, although subsequent Congressional attempts to outlaw lynching were defeated.

Holmes's parents sued Governor Rolph for his role in the lynching of their son, but the suit was dropped when the governor died of a heart attack in 1934. Thurmond's family took no action on his behalf and reportedly never again spoke about the matter amongst themselves. One young man was charged with the lynching after he publicly claimed credit for their deaths, but the charges were dropped. The Santa Clara County Grand Jury met the following year, but despite literally thousands of witnesses, sources of reporters, and hundreds of photographs, the grand jury found that no witnesses could identify anyone from the lynching, so no charges were filed.

The lynching was unique in American political and criminal justice history because it marked the first time that a lynching was a media event. It was also unique because of the political involvement of a state governor and the eager conspiracy by civic and business leaders and law enforcement (including the FBI) to lynch two men who had not been indicted, arraigned, tried, or sentenced for the crime in a court of law. 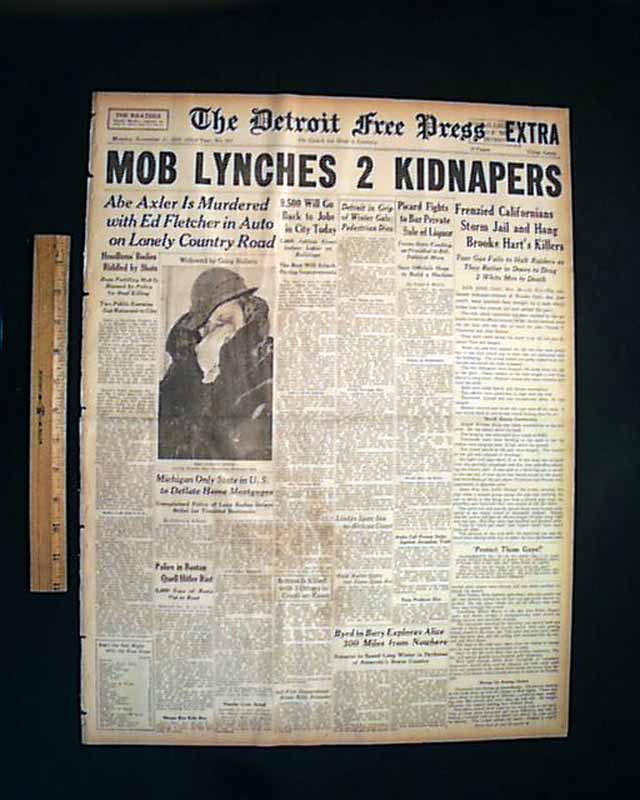 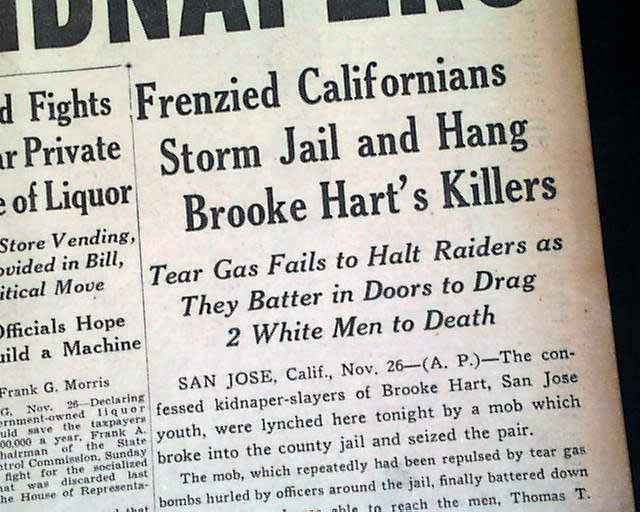 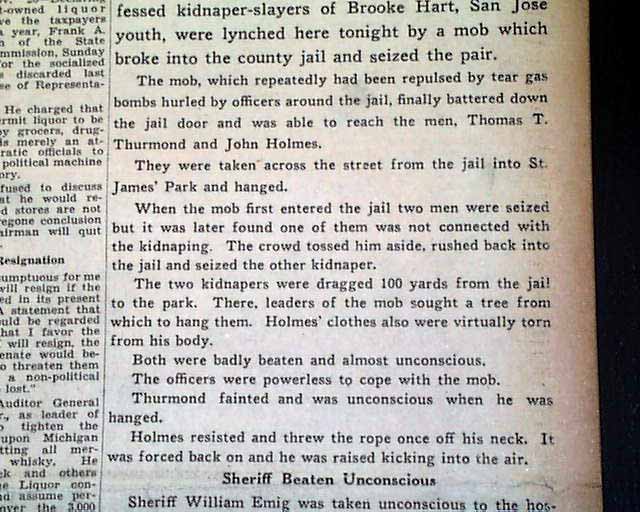 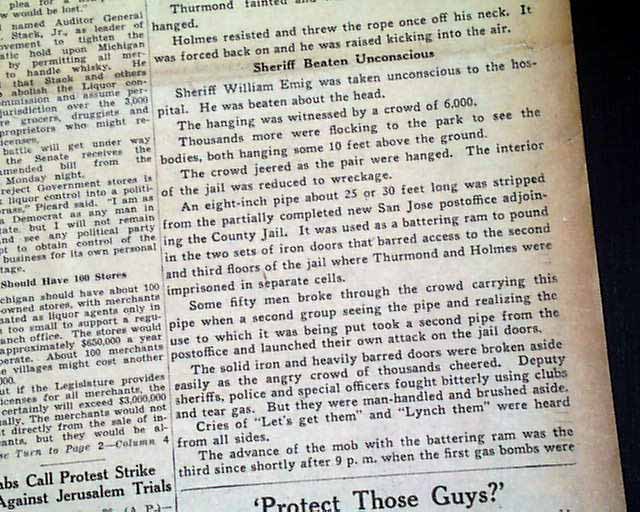 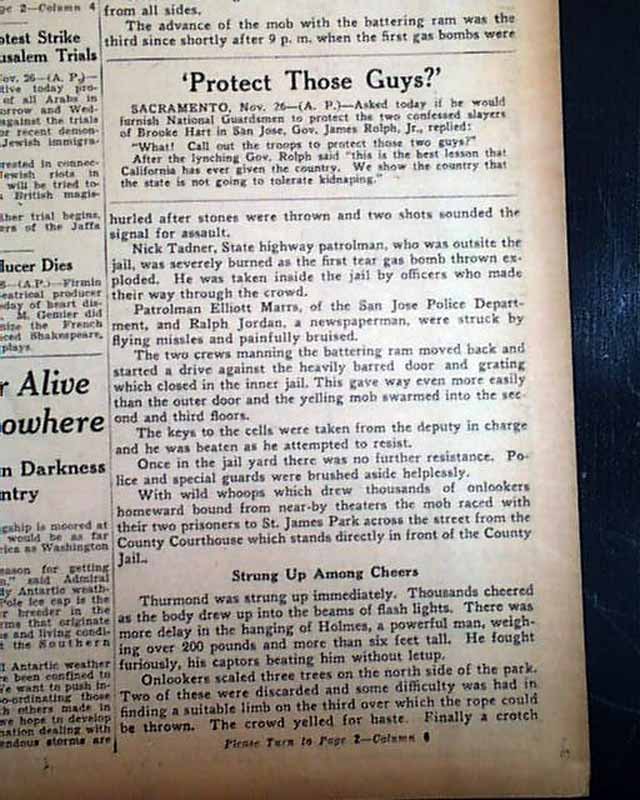 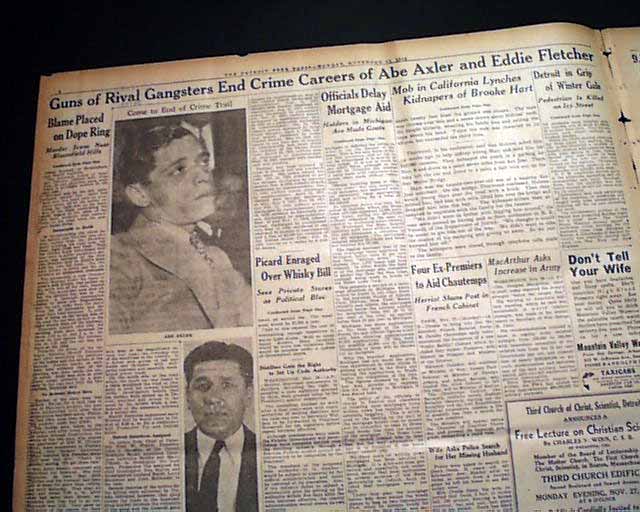 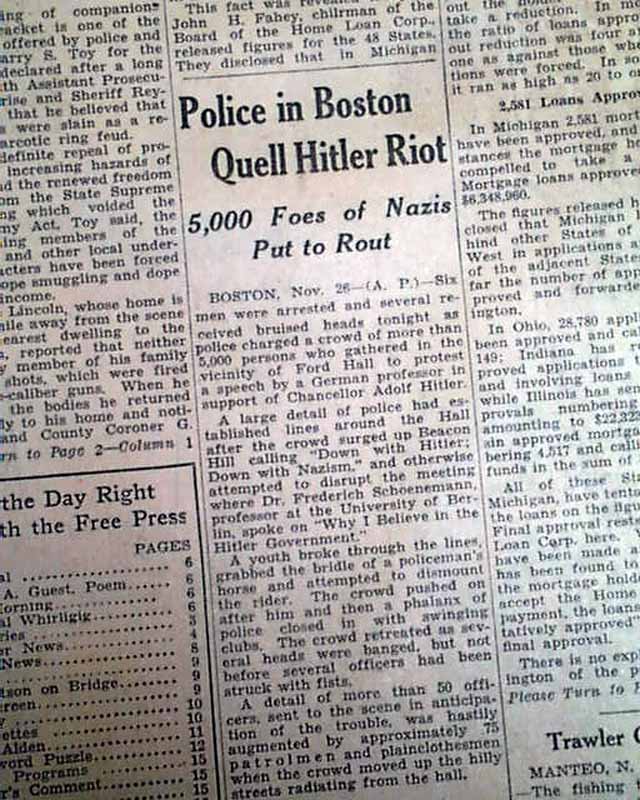