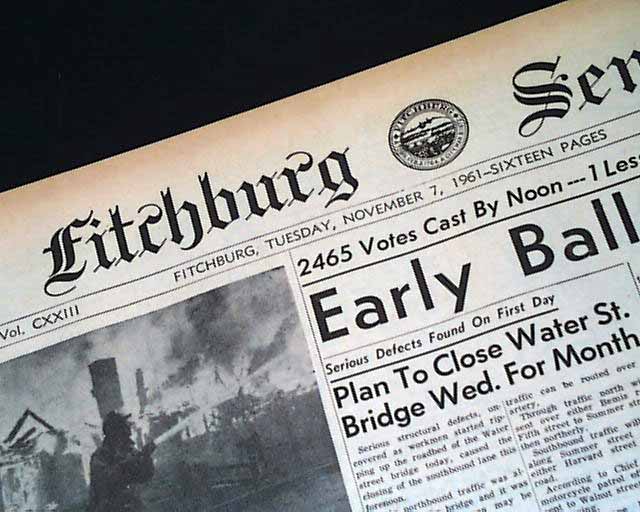 wikipedia notes: In 1961, a construction crew working in Sherman Oaks noticed the smoke and flames in a nearby pile of rubbish. Within minutes, Santa Ana winds gusting up to 60 mph  sent burning brush aloft and ultimately seared Nov. 6, 1961, into Los Angeles' civic memory.

Life magazine called it "A Tragedy Trimmed in Mink," and glittering stars of stage and screen scrambled to do battle with the blaze that swept through Bel Air and Brentwood that day. Flaming embers danced from roof to wood-shingled roof, spreading the fire across the Santa Monica Mountains to the south and into the affluent Westside enclaves.

In Bel Air, some film stars stood their ground against the encroaching flames. Maureen O'Hara risked her life to remain at her home and hose down her wooden roof. Fred MacMurray battled the flames and contained damage to just a portion of his home. But comedian Joe E. Brown saw his home burn to the ground. Burt Lancaster and Zsa Zsa Gabor also lost their homes.

Former Vice President Richard M. Nixon and his chief researcher, Al Moscow, were working on a draft of Nixon's "Six Crises" when the flames threatened his rented house on North Bundy Drive. Nixon and Moscow took to the roof to water down the wood shingles, saving the home.

More than 300 police officers helped evacuate 3,500 residents during the 12-hour fire, and more than 2,500 firefighters battled the blaze, pumping water from neighborhood swimming pools to douse flames in some areas. Pockets of the fire smoldered for several days. Even as firefighters battled what was to become the Bel Air disaster, a separate fire had erupted simultaneously in Santa Ynez Canyon to the west, further straining local firefighting resources. That blaze was contained the next day after consuming nearly 10,000 acres and nine structures and burning to within a mile of the inferno raging in Bel Air and Brentwood.