Home > Back to Search Results > An English Opinion Of Yankee Courage...
Click image to enlarge 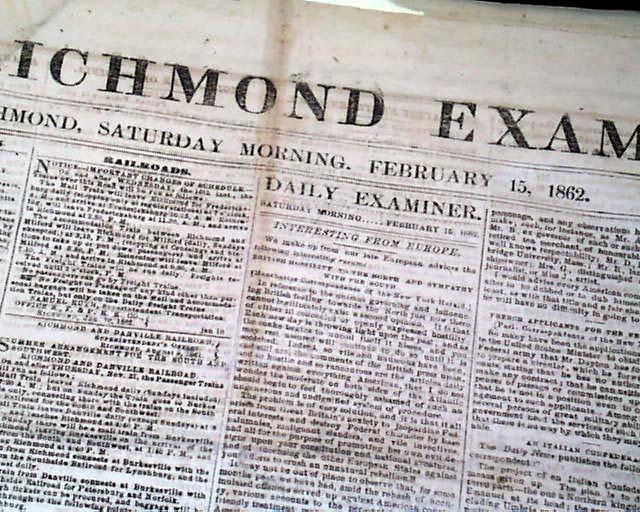 An English Opinion Of Yankee Courage...

A nice newspaper from the Confederacy, and from the capital of the Confederacy as well.  Half of the front page is taken up with ads, plus there is: "Interesting from Europe" which includes a subhead: "The Mason-Slidell Affair--An English Opinion Of Yankee Courage--The American Difficulty at the Court of France..." and more. Also on the front page: "Notes Of The War" with subheads: "The Southern Congress & the War--The South to be Subjugated--An Appeal for the Slaves to be Set Free--A Dictator to be Appointed Over the South--The Trials & Tribulations of Yankeedom...".
Page 2 has a lengthy editorial, which begins: "From the valiant Senator down to the timid seamstress, the question on every tongue in Richmond is, whether the enemy are likely to penetrate with their gunboats to this city?..." with much more. Also on pg. 2: "The Latest Northern News--Movements & Spirit of the War" "The Roanoke Island Fight--Further Particulars--Our Loss" "Examiner's Correspondence". Page 3 has city & court reporting as well as "Telegraphic News" taking most of a column.
Complete as a four page newspaper, never bound nor trimmed.  An archival mend near the top left corner of the front page (in the masthead) has been archivally mended from the reverse side, with a few small holes caused by a flaw when made, not from wear, are present.  Generally in nice condition.