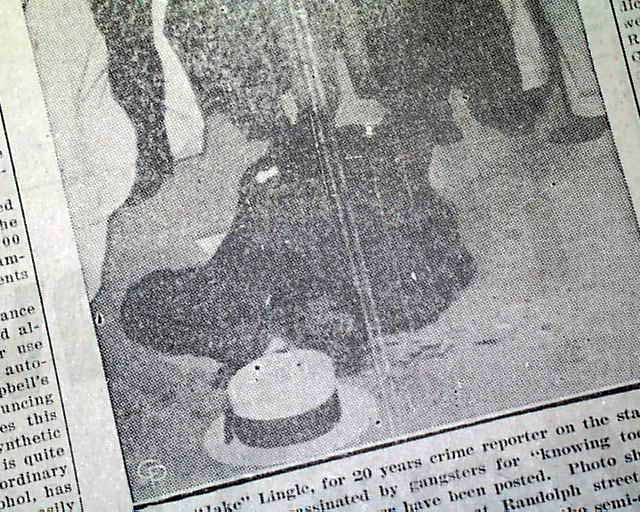 This 12 page newspaper has two column headlines on the front page:
"AGENCIES SPURRED TO FEVERISH HEAT IN HUNT FOR LINGLE SLAYER" "Public Opinion Demands Complete and Sudden End to Gang Reigns and Hired Murderers--Threaten Shake-up in Police Department" with photo of Lingle, face down on the sidewalk dead (see photos).

Tells of the gangland death of Chicago reporter Jake Lingle. Though the murder was never solved, many believe this was gangster boss Al Capone's doing.

Other news of the day throughout including various advertising. Light browning with minor margin wear, but otherwise in good condition.

wikipedia notes: Alfred "Jake" Lingle, Jr. (July 2, 1891 - June 9, 1930) was a reporter for the Chicago Tribune. He was shot dead gangland-style at the Illinois Central train station underpass, during rush hour on June 9, 1930 as dozens of people watched. The hit man was never found and the crime remains unsolved[1] [2]

Lingle was initially lionized as a journalistic martyr, but it was eventually revealed that he was involved in racketeering and that his death had more to do with his criminal activities than his journalism.

In 1959, the Jake Lingle murder was dramatized on an episode of The Untouchables, on TV.