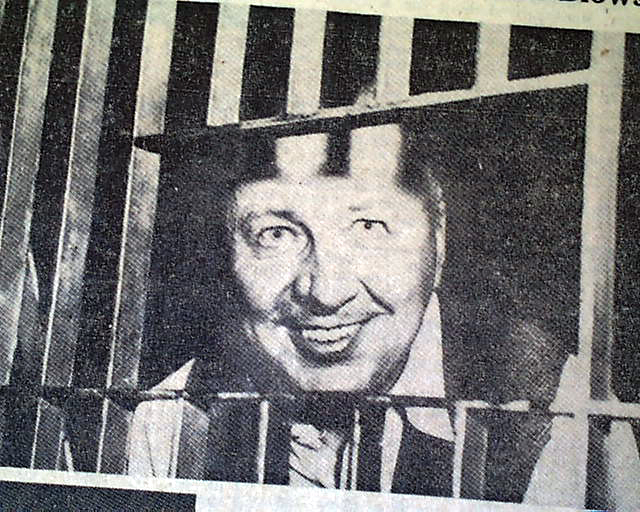 This 34 page newspaper has a four column headline on the front page: "I'M GLAD I DID IT,' 'BOMBER' STATES" with subheads and famous photo of Metesky behind bars. (see)

Tells of the capture of the New York City 'Mad Bomber', George Metesky.

wikipedia notes: George P. Metesky (November 2, 1903 – May 23, 1994), better known as the Mad Bomber, terrorized New York City for 16 years in the 1940s and 1950s with explosives that he planted in theaters, terminals, libraries and offices. Bombs were left in phone booths, storage lockers and restrooms in public buildings, including Grand Central Terminal, Pennsylvania Station, Radio City Music Hall, the New York Public Library, the Port Authority Bus Terminal and the RCA Building, as well as in the New York City Subway. Perhaps most notably, Metesky bombed movie theaters, where he cut into seat upholstery and slipped his explosive devices inside.

Angry and resentful about events surrounding a workplace injury suffered years earlier, Metesky planted at least 33 bombs, of which 22 exploded, injuring 15 people. He was apprehended based on an early use of offender profiling and clues given in letters he wrote to a newspaper. He was found legally insane and committed to a state mental hospital.