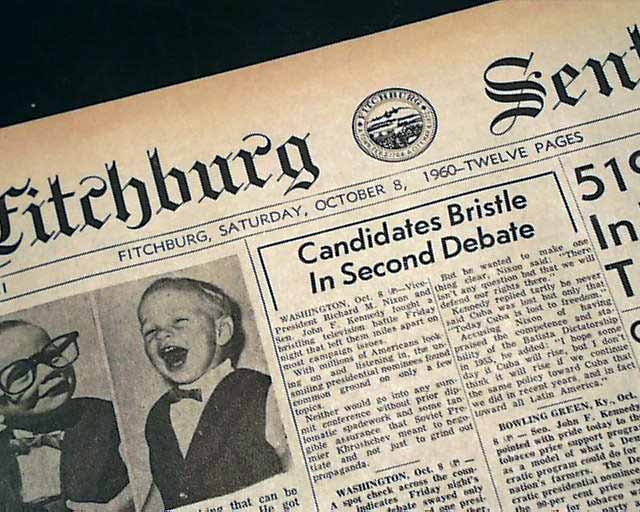 This 12 page newspaper has a two column headline on the front page: "Candidates Bristle In Second Debate".

Tells of the 2nd of the four JFK & Nixon presidential debates which were the first debates to be held on National television.

Other news of the day. Minor margin wear, otherwise in nice condition.

wikipedia notes: The key turning point of the campaign were the four Kennedy-Nixon debates; they were the first presidential debates held on television, and thus attracted enormous publicity. Nixon insisted on campaigning until just a few hours before the first debate started; he had not completely recovered from his hospital stay and thus looked pale, sickly, underweight, and tired. He also refused makeup for the first debate, and as a result his beard stubble showed prominently on the era's black-and-white TV screens. Nixon's poor appearance on television in the first debate is reflected by the fact that his mother called him immediately following the debate to ask if he was sick. Kennedy, by contrast, rested before the first debate and appeared tanned, confident, and relaxed during the debate. An estimated 80 million viewers watched the first debate. Most people who watched the debate on TV believed Kennedy had won while radio listeners (a smaller audience) believed Nixon had won. After it had ended polls showed Kennedy moving from a slight deficit into a slight lead over Nixon. For the remaining three debates Nixon regained his lost weight, wore television makeup, and appeared more forceful than his initial appearance. However, up to 20 million fewer viewers watched the three remaining debates than the first debate. Political observers at the time believed that Kennedy won the first debate, Nixon won the second and third debates, and that the fourth debate, which was seen as the strongest performance by both men, was a draw.