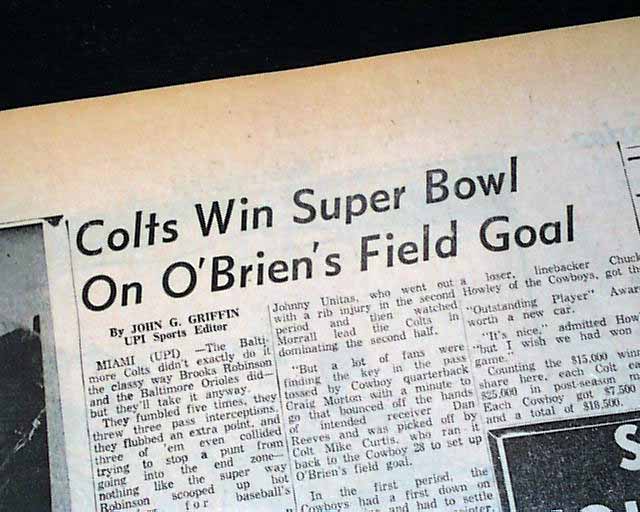 This 10 page newspaper has a three column headline on the 3rd page: "Colts Win Super Bowl On O'Brien's Field Goal" which tells of the Baltimore Colts beating the Dallas Cowboys in Super Bowl V.

Super Bowl V was the first Super Bowl played after the completion of the AFL-NFL Merger. As per the merger agreement, all 26 AFL and NFL teams were divided into 2 conferences with 13 teams in each of them. The NFL's Colts, the Cleveland Browns, and the Pittsburgh Steelers agreed to join the other 10 AFL teams to form the AFC. The remaining 13 NFL teams formed the NFC. This explains why the Colts represented the NFL in Super Bowl III, but not the NFC for Super Bowl V.

The game is sometimes called the "Blunder Bowl" or the "Stupor Bowl" because it was filled with poor play, penalties, turnovers, and officiating miscues. The two teams committed a Super Bowl record 11 combined turnovers in the game, and the Colts' 7 turnovers are currently the most ever committed by a winning team in a Super Bowl. Dallas also set a Super Bowl record with 10 penalties, costing them 133 yards. Bubba Smith refuses to wear his Super Bowl V ring because of the "sloppy" play[1].

It was finally settled with five seconds left when Colts rookie kicker Jim O'Brien kicked a 32-yard field goal. In order to win the game, Baltimore had to overcome a 13–6 deficit at the half, losing their starting quarterback in the second quarter.

It is also the only Super Bowl in which the Most Valuable Player Award was given to a member of the losing team: Cowboys Linebacker Chuck Howley, who intercepted two passes. Sacks and tackles were not yet recorded. It was the first time a QB didn't win the award. Howley refused to accept the award because it was meaningless to him after his team lost.