Home > Back to Search Results > Jess Sweetser in 1926...
Click image to enlarge 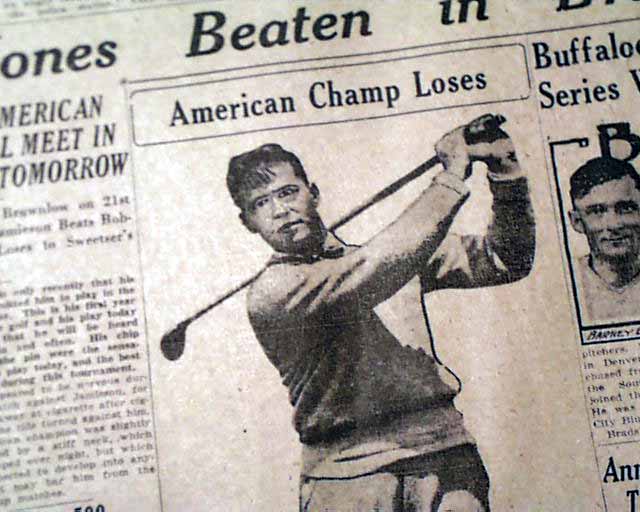 This 16 page newspaper has a banner headline on page 13: "Bobby Jones Beaten in British Golf Tournament" with subheads and photo of Jones. (see)

wikipedia notes: Jesse W. "Jess" Sweetser (April 18, 1902 – May 27, 1989) was an amateur golfer, best known as the first American-born player to win the British Amateur Championship (the first U.S. citizen to win it was the Australian-born naturalized-American Walter Travis).

Sweetser won the 1922 U.S. Amateur Championship at the age of 20, defeating Bobby Jones 8 & 7 in the semifinal and then Chick Evans 3 & 2 in the final match. The following year, he again made the finals but lost on the second playoff hole to Max Marston.

In 1926, Sweetser won the British Amateur Championship at Muirfield, defeating A.F. Simpson 6 & 5 in the final match. The 1904 winner, Walter Travis, was a naturalized American citizen born in Australia, but Sweetser's victory was the first time an American-born golfer had won the tournament.

In his professional life, Sweetser started as a stockbroker in the 1920s, and later went to work for Curtiss-Wright. He retired in 1967 as a vice-president with Martin Marietta.[1]

Sweetser also served as treasurer and on the executive committee of the United States Golf Association.[2] In 1986, he was named the Bob Jones Award winner, given in recognition of distinguished sportsmanship in golf.