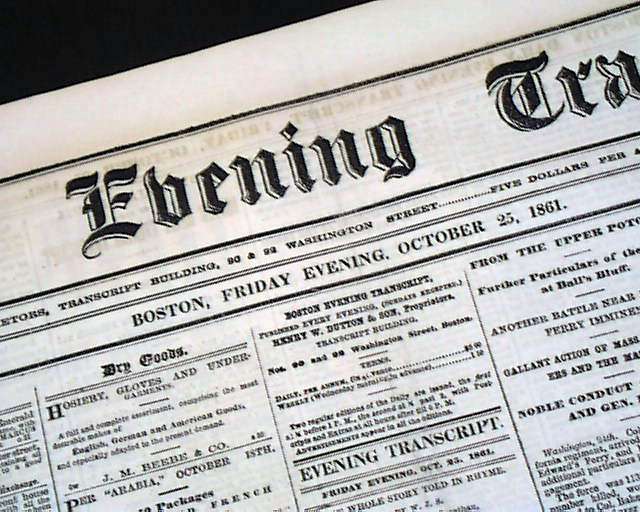 This Genuine newspaper has a Wealth of Civil War reporting from during Abraham Lincoln's administration. Among the one column headlines on the Civil War are: "FROM THE UPPER POTOMAC" "Further Particulars of the Battle at Ball's Bluff" "From Missouri" "Another Federal Victory" and much more.

Complete as a 4 page issue. This issue is not fragile as newsprint from this era was made of cotton and linen rags, allowing them to remain very pliable and easy to handle. Minor margin and central fold wear, otherwise in good condition.

wikipedia notes: The Battle of Ball's Bluff, also known as the Battle of Harrison’s Island or the Battle of Leesburg, was fought on October 21, 1861, in Loudoun County, Virginia, as part of Union Maj. Gen. George B. McClellan's operations in Northern Virginia during the American Civil War.

While a minor engagement in comparison with the battles that would take place in years to follow, it was the second largest battle of the Eastern Theater in 1861, and in its aftermath had repercussions in the Union Army's chain of command structure and raised separation of powers issues under the United States Constitution during the war.