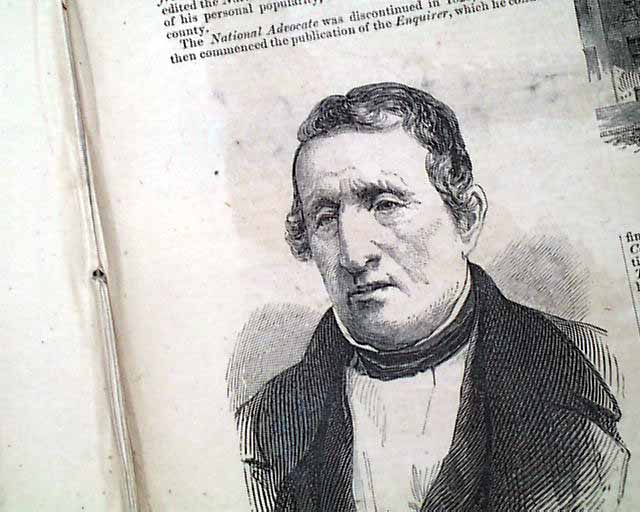 Back page has two half page illustration: "Arrival Of Mr. Buchanan At The Everett House, Union Park, N.Y."

wikipedia notes: Mordecai Manuel Noah (July 14, 1785, Philadelphia, Pennsylvania,- May 22, 1851, New York) was an American playwright, diplomat, journalist, and utopian. Born in a family of Portuguese Sephardic ancestry; he was the first Jew born in the United States to reach national prominence.

Noah engaged in trade and law, but when removing to Charleston, South Carolina, dedicated himself to politics.
Noah's book Travels in England, France, Spain, and the Barbary States, in the Years 1813-14 and 15

In 1811, he was appointed by President James Madison as consul at Riga, then part of Imperial Russia, but declined, and, in 1813, was nominated Consul to the Kingdom of Tunis, where he rescued American citizens kept as slaves by Morroccan masters. Allegedly, Noah was removed from this position because, in the words of US Secretary of State James Monroe, his religion was "an obstacle to the exercise of [his] Consular function." The firing caused outrage among Jews and non-Jews alike.

Manuel Noah moved to New York, where he founded and edited The National Advertiser, The New York Enquirer (later merged into The Courier and Enquirer), The Evening Star, and The Sunday Times newspapers.
In his letter to Noah dated May 28, 1818, former President Thomas Jefferson sheds light on the nature of democracy and his own faith in humankind

1844 Discourse on the Restoration of the Jews by M.M.Noah, page 1. The page 2 shows the map of the Land of Israel

In 1825, with virtually no support from anyone-not even his fellow Jews- in a precursor to modern Zionism, he tried to found a Jewish "refuge" at Grand Island in the Niagara River, to be called "Ararat," after Mount Ararat, the Biblical resting place of Noah's Ark. He had brought with him a cornerstone which read "Ararat, a City of Refuge for the Jews, founded by Mordecai M. Noah in the Month of Tishri, 5586 (September, 1825) and in the Fiftieth Year of American Independence." Noah also shared the belief among various others that some of the Native American Indians were from the Lost Tribes of Israel, from which he wrote the Discourse on the Evidences of the American Indians beign the Descendants of the Lost Tribes of Israel. Some have speculated whether Noah's utopian ideas may have influenced Joseph Smith, who founded the Latter Day Saint movement in Upstate New York a few years later. In his Discourse on the Restoration of the Jews[4] Noah proclaimed his faith that the Jews would return and rebuild their ancient homeland and called on America to take the lead in this endeavor. On September 2nd, soon after arriving in Buffalo from New York, Noah led a small procession to the local Episcopal church. Here, there was a brief ceremony- including a singing of the psalms in Hebrew- the cornerstone was laid on the communion table, and the new proclamation establishing the refuge was read. This was the beginning and the end of Mordecai Noah's venture: he lost heart and returned to New York a couple days later without once having set foot on the island. The cornerstone was taken out of the audience chamber of the church and laid against the back of the building. It is now on permanent display at the Grand Island Town Hall.