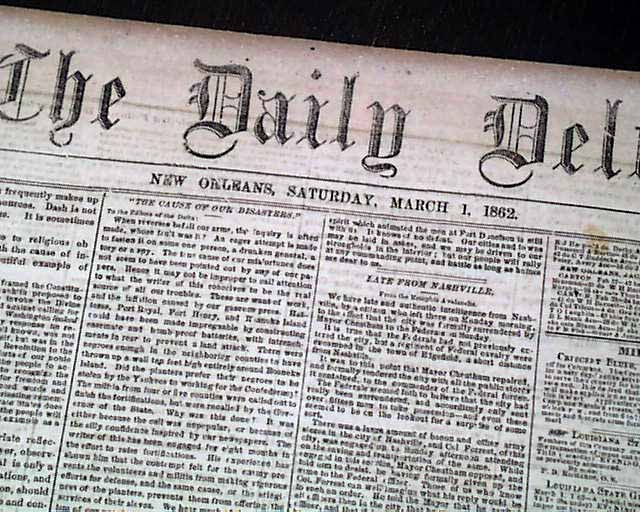 Truly Confederate newspapers from New Orleans are very difficult to find, as Admiral Farragut entered the mouth of the Mississippi in mid-April, 1862 and finally took New Orleans on April 28.

Shortly thereafter Benjamin Butler moved in and took control of the city, it surrendering without a fight. So "Confederate" issues from New Orleans are limited to those published between Louisiana's secession from the Union on January 26, 1861 and the end of April, 1862, just a brief 15 month period.

Page 2 has war news "From Memphis" "From Richmond" as well as the "Latest From Nashville". Page 3 has news "From Our Army In The West" & reports headed: "The N.Y. Herald On The Federal Navy And The Generalship Of The North" "Federal Reports From Missouri" "The Gunboat Fight On Cumberland River" & a "Proclamation By The Governor Of Georgia".

Page 3 also has reward notices for "...the bright mulatto boy William Henry..." & "...the negro boy called Gus...", each with a small engraving of a runaway.