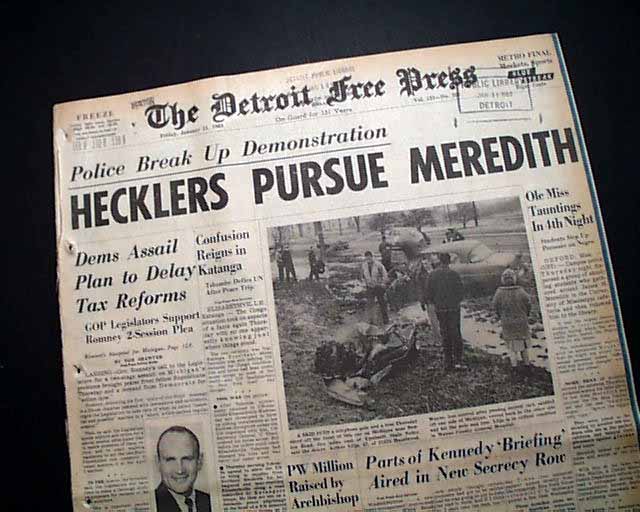 This 40+ page newspaper has a nice banner headline on the front page: "HECKLERS PURSUE MEREDITH" with subheads that include: "Ole Miss Tauntings In 4th Night" and more.

Other news of the day throughout. Small binding holes along the spine, otherwise in good condition.

Meredith was born in Kosciusko, Mississippi of Native American (Choctaw) and African American heritage. He enlisted in the United States Air Force right out of high school and served from 1951 to 1960. He then attended Jackson State College for two years. He applied to the University of Mississippi, but was denied twice.[1]

On October 1, 1962, he became the first black student at the University of Mississippi,[2] after being barred from entering on September 20. His enrollment, virulently opposed by segregationist Governor Ross Barnett, sparked riots on the Oxford campus, which required federal troops and U.S. Marshals, who were sent by President John F. Kennedy. The riots led to a violent clash which left two people dead, including French journalist Paul Guihard,[3] 48 soldiers injured and 30 U.S. Marshals with gun wounds. Barnett was fined $10,000 and sentenced to jail for contempt, but the charges were later dismissed by the 5th Circuit Court of Appeals. Bob Dylan sang about the incident in his song Oxford Town. Meredith's actions are regarded as a pivotal moment in the history of civil rights in the United States. He graduated on August 18, 1963 with a degree in political science.