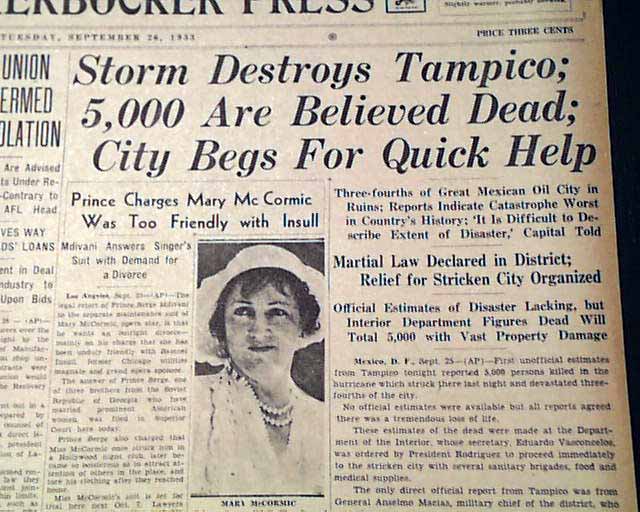 This 16 page newspaper has a four column headline on the front page: "Storm Destroys Tampico; 5,000 Are Believed Dead; City Begs For Quick Help" with subheads. Other news of the day throughout.

Little browning and minor wear around the margins, otherwise good.

wikipedia notes: Reports indicate much of the city of Tampico was destroyed, and the total number of deaths and injuries amounted to over 5,000. Most of the deaths occurred from flood waters, which were 10 to 15 feet (3.0–4.6 m) deep and covered the entire city;[34] many bodies were washed out to sea, and were never recovered. The flooding washed out roads and railroads, delaying relief efforts into the devastated area. Water and food supplies in and around Tampico were damaged or contaminated, resulting in a threat of famine or disease that further aggravated the situation.[35] Torrential rains caused more flooding, and the powerful winds damaged or destroyed nearly every building in the city and left many homeless.[36] The strong winds downed numerous power lines, leaving the entire city in blackout, and destroyed two large water towers. There were at least 10 cases of looting; all of the perpetrators were executed. Damage in and around Tampico totaled to over $10 million (1933 USD, $165 million 2008 USD),[37] and the storm killed over 184 people.[7]

The thousands of victims took refuge in churches, theatres, and public buildings. Immediately after the storm, the Mexican military placed the city under martial law.[37] Military and federal authorities dispatched trains with food, water, and medicine,[36] and planes bearing engineers and doctors. Mexican president Abelardo L. Rodríguez rallied citizens to aid the affected people in the storm area. The local chamber of deputies allowed $140,000 (1933 USD) in funds for the storm victims.