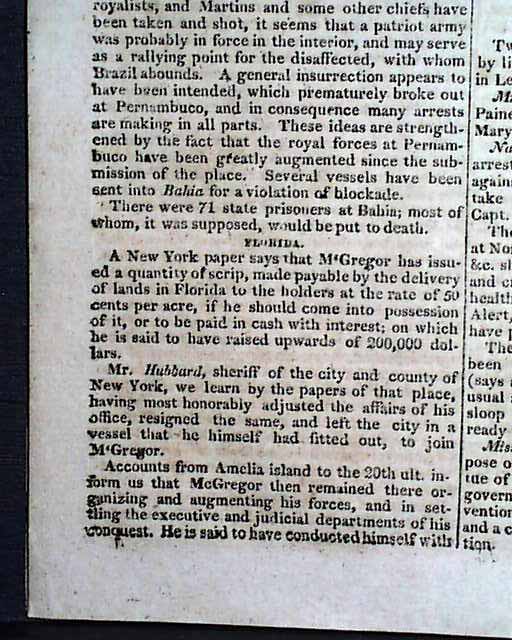 
NILES' WEEKLY REGISTER, Baltimore, August 9, 1817  One of the reports in this issue is headed "Florida" and includes: "...says that M'Gregor has issued a quantity of script, made payable by the delivery of lands in Florida to the holders...Accounts from Amelia Island to the 20th ult. inform us that McGregor then remained there organizing & augmenting his forces & in setting the executive & judicial departments of his conquest...The following is another of his proclamation..." with the texts of the Proclamation.
Following this is: "The evacuation of Fort San Nicholas by the Spanish forces on the fourth of this month has placed the adjacent territory under the control & protection of the independent government..." with more.
Among other reports in this issue are:
* "President's Tour"
* "The President's reply..." to an address from people at Portland, which is signed in type: James Monroe

Sixteen pages, 6 1/2 by 10 inches. There is a repair to minor loss at the margin of each leaf which only slightly affects readability. Otherwise in good condition.