Home > Back to Search Results > Print of the new flag of the Confederacy...
Click image to enlarge 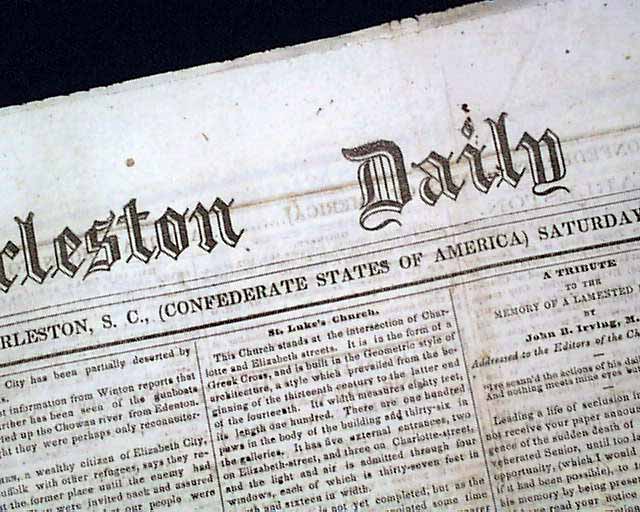 Print of the new flag of the Confederacy...

* with "Confederate States Of America" in the masthead
* Print of the new flag of the Confederacy : the Civil War

Only a few newspapers from the Confederacy actually printed "Confederates States of America" in the masthead. This is one of them.

The back page has an article titled: "The New Flag of the Confederacy" which includes a rare sketch of the flag (see photos), with the article giving more detail as to its design.

Not surprisingly there are many Civil war related articles throughout the issue including: "Burke on Slavery & the Southern Character" "From New Orleans--Glorious News--Arrival of 15,000 Arms--Further from Fort Donelson" "The Enemy in North Carolina--The Late Fight" "A New Canadian Grievance Against the United States" "The North Carolina Convention" "Let Charleston Troops Rally to the Defence of Charleston & the Vicinity" with more.

Page 3 is entirely taken up with advertisements.

Complete in 4 pages, never bound nor trimmed, wear at the central fold causes a wear hole at the very center of the front leaf & some loss along the fold not affecting any mentioned text. Otherwise this issue is in nice condition.