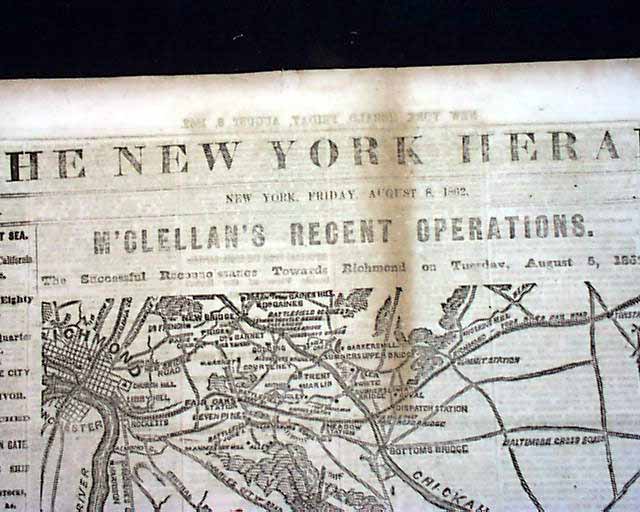 This 8 page newspaper is in nice condition (except for some margin wear) due to the use of cotton and rag paper during this very historic time in U.S. history. This issue is loaded with advertisements and Civil War reports throughout from the day it was first reported which includes the following FRONT PAGE Map: "McCLELLAN'S RECENT OPERATIONS, The Successful Reconnoissance Towards Richmond on Tuesday, August 5, 1862". Headlines in this issue includes: "Important From McClellan's Army" "Our Army Advancing on Richmond" "Occupancy of Malvern Hill by Gen. Hooker's Division" "Spirited Brush With The Rebels" "Two Hundred Rebel Soldiers Captured" "Operations Of General Pope" "Important From The Rebel Capital" "The Fire Zouaves In Prison" "Operations of the Guerrillas" and much more. Nice to read about the Civil War as it was happening.