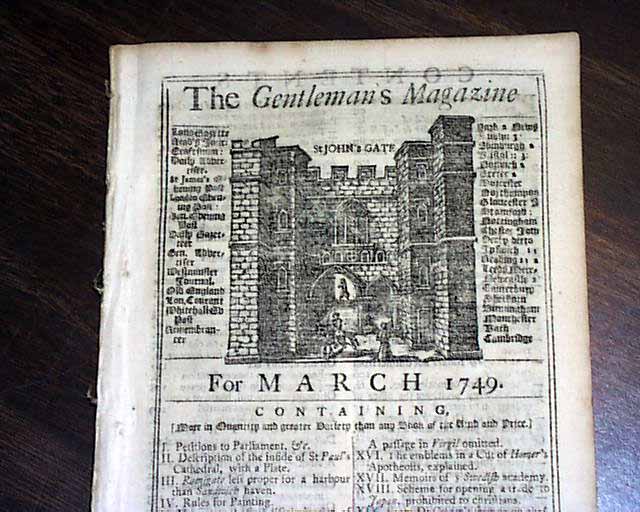 Item # 209530
THE GENTLEMAN'S MAGAZINE, London, March, 1749  Among the interesting items in this issue are: "Plan of a Harbour to the Downs" which includes an illustration of it ; "A Description of St. Paul's Cathedral" "Antient Ships of an Enormous Size" "Account of Nova Scotia from Mr. Little" "Fundy Bay" "Sermon on Chastity, Before the King"  "Proposal to Extend our Trade to Japan" and more.
Also of interest is: "Memorial of the Merchants & Others Trading to, & Interested in, New England, to the Lords of  the Treasury" which begins: "That the common currency of New England hath consisted in paper bills of credit for thirty years, which, by the uncertainty & remoteness of their redemption, have lost more than nine tenths of their value to the unspeakable prejudice of the British merchants trading there, the great distress of the inhabitants, and the ruin of many thousands of people..." with more.
Near the back is the "Historical Chronicle" which has the latest news events of the day.
Complete in 48 pages, measures 5 by 8 1/4 in., full title/contents page featuring an engraving of St. John's Gate.