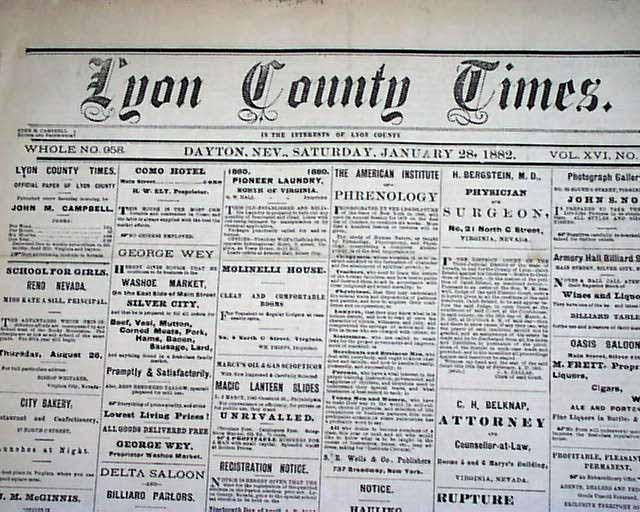 
LYON COUNTY TIMES, Dayton, Nevada, 1882 Nevada's first non-Indian settlement, Dayton's original residents were hard-scrabble prospectors who panned for gold in nearby Gold Canyon. By the spring of 1851, as many as 200 miners were living in the area. By 1856, the community was generally known as Chinatown, because a large Chinese population was reworking the placer deposits. In November 1861, the towns residents voted to rename the community Dayton, in honor of John Day, who had surveyed the townsite. Shortly after, Dayton was designated the seat of Lyon County by Nevada's first Territorial Legislature. Dayton benefited from its proximity to nearby Virginia City's rich Comstock Lode and location on the banks of the Carson River. In the early 1860s, several stamp mills were constructed near the community to process silver and gold ore. Additionally, the town served as a stop on the routes of both the Pony Express and the overland stage.


This 4 page issue is filled with Western-style ads on pgs. 1 & 4 with various news of the day, and additional ads, on pags 2 & 3. This newspaper recently relocated from nearby Silver City where it was founded in 1874. Very nice condition, never bound nor trimmed, a scarce title from the early mining district of Nevada. The photo below is "generic" however the issue you receive will have a similar look & will be dated 1882.