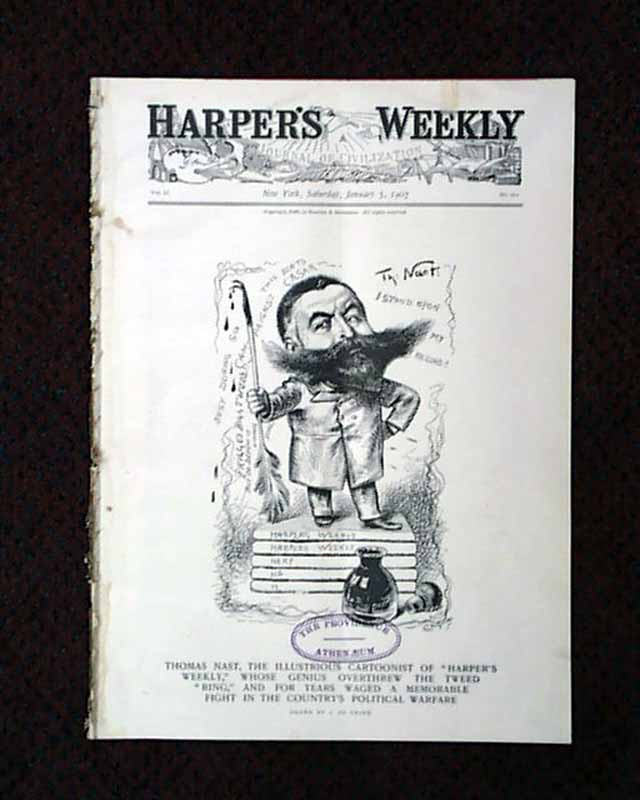 HARPER'S WEEKLY, New York, Jan. 5, 1907  There is a front page illustration: "Thomas Nast, The Illustrious Cartoonist of "Harper's Weekly," Whose Genius Overthrew the Tweed "Ring," And for Years Waged a Memorable Fight in the Country's Political Warfare" by C. De Grimm. This issue is mostly made of articles about past issues of "Harper's Weekly." The headline for these articles is "Reminiscences of Fifty Years of "Harper's Weekly": 1857-1907" with articles like "Recollections of an Early Editor" with illustrations of "The greatest of New York's Social Functions in the Decade before the War" which was seen in a past issue, as well as, "The First "Comic" Printed in "Harper's Weekly."" There is an article called " 'Harper's Weekly' and Thomas Nast" by Albert Bigelow Paine with an drawing by Thomas Nast "Let Us Prey" from the September 23, 1971 issue of "Harper's Weekly." Along-side the walking down memory lane of Harper's Weekly, in this issue, there is also photos of "Notable Figures in the History of "Harpers Weekly" such as "Henry Loomis Nelson"; "Henry Mills Alden"; "William Dean Howells"; "John Kendrick Bangs".